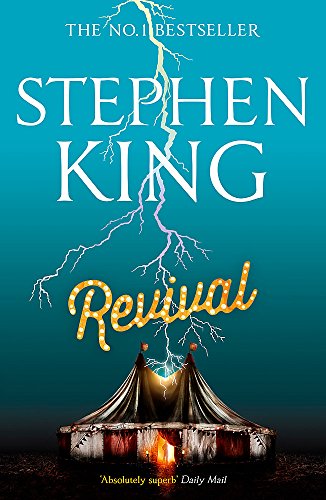 Used Price
£4.49
New RRP £9.99
Free Shipping in the UK
The No. 1 hardback bestseller, King's spectacularly dark and electrifying novel about music, the powerful bond between two people, addiction, religion and what might exist on the other side of life.
Like New Very Good Good Well Read

A spectacularly dark and electrifying novel about addiction, religion, music and what might exist on the other side of life.

In a small New England town, in the early 60s, a shadow falls over a small boy playing with his toy soldiers. Jamie Morton looks up to see a striking man, the new minister, Charles Jacobs. Soon they forge a deep bond, based on their fascination with simple experiments in electricity.

Decades later, Jamie is living a nomadic lifestyle of bar-band rock and roll. Now an addict, he sees Jacobs again - a showman on stage, creating dazzling 'portraits in lightning' - and their meeting has profound consequences for both men. Their bond becomes a pact beyond even the Devil's devising, and Jamie discovers that revival has many meanings.

This rich and disturbing novel spans five decades on its way to the most terrifying conclusion Stephen King has ever written. It's a masterpiece from King, in the great American tradition of Nathaniel Hawthorne and Edgar Allan Poe.

Simply superb . . . classic King: intimate, readable and convincing . . . tastier than most bestsellers out there * Independent *
Classic King territory...satisfyingly disturbing... it's a sharp and detailed character study of two very different men; King's books have always been as much about character as they are about making the hairs stand up on the back of the neck * Express *
King at his regal best, fully in command of a terrifying story, a great cast and page after page after page of top-notch writing . . . the darkness of genuine horror. Absolutely superb * Daily Mail *
King has done it again: captured the reader with his excellent writing and forced her to read herself into a gibbering wreck. Not for nothing do they call him the master of horror * The Times *
There are few writers able so effortlessly, so naturally and so intimately to lay out the details of a life * Guardian *
Vintage King * Sunday Mirror *

GOR007192826
Revival by Stephen King
Stephen King
Used - Like New
Paperback
Hodder & Stoughton
2015-09-08
400
144478921X
9781444789218
N/A
Book picture is for illustrative purposes only, actual binding, cover or edition may vary.
The book has been read, but looks new. The book cover has no visible wear, and the dust jacket is included if applicable. No missing or damaged pages, no tears, possible very minimal creasing, no underlining or highlighting of text, and no writing in the margins.