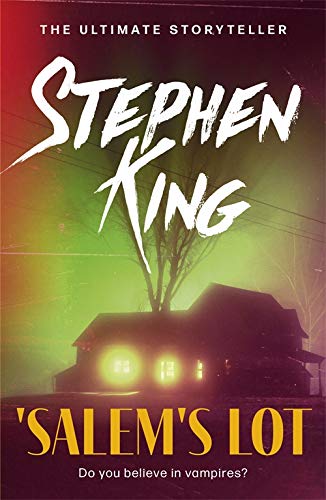 'Turn off the television - in fact, why don't you turn off all the lights except for the one over your favourite chair? - and we'll talk about vampires here in the dim. I think I can make you believe in them.'
Stephen King, from the Introduction.

'Salem's Lot is a small New England town with the usual quota of gossips, drinkers, weirdos and respectable folk. Of course there are tales of strange happenings - but not more than in any other town its size.

Ben Mears, a moderately successful writer, returns to the Lot to write a novel based on his early years, and to exorcise the terrors that have haunted him since childhood. The event he witnessed in the house now rented by a new resident. A newcomer with a strange allure. A man who causes Ben some unease as things start to happen: a child disappears, a dog is brutally killed - nothing unusual, except the list starts to grow.

Soon surprise will turn to bewilderment, bewilderment to confusion and finally to terror . . .

GOR003890096
'Salem's Lot by Stephen King
Stephen King
Used - Very Good
Paperback
Hodder & Stoughton
2011-11-10
768
1444708147
9781444708141
N/A
Book picture is for illustrative purposes only, actual binding, cover or edition may vary.
This is a used book - there is no escaping the fact it has been read by someone else and it will show signs of wear and previous use. Overall we expect it to be in very good condition, but if you are not entirely satisfied please get in touch with us.