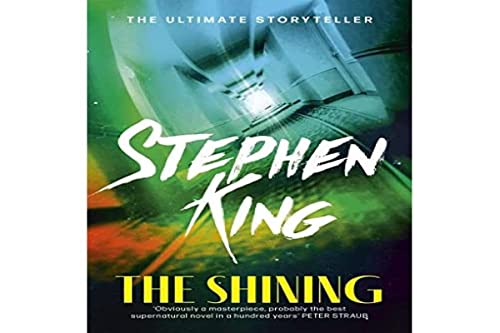 The Shining
by Stephen King

In Stock
£8.99
One of the true classics of horror fiction, THE SHINING is regarded as one of Stephen King's masterpieces.
Very Good
Only 1 left

The Shining by Stephen King

Before Doctor Sleep, there was The Shining, a classic of modern American horror from the undisputed master, Stephen King.

Danny is only five years old, but in the words of old Mr Hallorann he is a 'shiner', aglow with psychic voltage. When his father becomes caretaker of the Overlook Hotel, Danny's visions grow out of control.

As winter closes in and blizzards cut them off, the hotel seems to develop a life of its own. It is meant to be empty. So who is the lady in Room 217 and who are the masked guests going up and down in the elevator? And why do the hedges shaped like animals seem so alive?

Somewhere, somehow, there is an evil force in the hotel - and that, too, is beginning to shine . . .

GOR004573396
The Shining by Stephen King
Stephen King
The Shining
Used - Very Good
Paperback
Hodder & Stoughton
2011-11-10
512
1444720724
9781444720723
N/A
Book picture is for illustrative purposes only, actual binding, cover or edition may vary.
This is a used book - there is no escaping the fact it has been read by someone else and it will show signs of wear and previous use. Overall we expect it to be in very good condition, but if you are not entirely satisfied please get in touch with us.