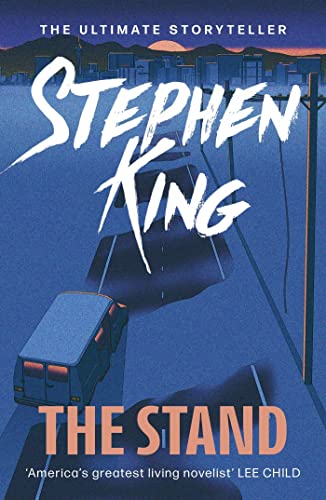 The Stand by Stephen King

'THE STAND is a masterpiece' (Guardian). Set in a virus-decimated US, King's thrilling American fantasy epic, is a Classic.

The Stand by Stephen King

Stephen King's apocalyptic vision of a world blasted by virus and tangled in an elemental struggle between good and evil remains as riveting and eerily plausible as when it was first published.

Soon to be a television series.

'THE STAND is a masterpiece' (Guardian). Set in a virus-decimated US, King's thrilling American fantasy epic, is a Classic.

First come the days of the virus. Then come the dreams.

Dark dreams that warn of the coming of the dark man. The apostate of death, his worn-down boot heels tramping the night roads. The warlord of the charnel house and Prince of Evil.

His time is at hand. His empire grows in the west and the Apocalypse looms.

When a man crashes his car into a petrol station, he brings with him the foul corpses of his wife and daughter. He dies and it doesn't take long for the virus which killed him to spread across America and the world.

Stephen King is the author of more than sixty books, all of them worldwide bestsellers. His recent work includes Sleeping Beauties (co-written with his son Owen King), the short story collection The Bazaar of Bad Dreams, the Bill Hodges trilogy End of Watch, Finders Keepers, and Mr. Mercedes (an Edgar Award winner for Best Novel, and shortlisted for the CWA Gold Dagger Award).

Many of King's books have been turned into celebrated films, television series and streamed events including The Shawshank Redemption, Gerald's Game and It.

King is the recipient of the 2014 National Medal of Arts and the 2003 National Book Foundation Medal for Distinguished Contribution to American Letters. He lives in Bangor, Maine, with his wife, novelist Tabitha King.

GOR003918846
9781444720730
1444720732
The Stand by Stephen King
Stephen King
Used - Well Read
Paperback
Hodder & Stoughton
2011-05-12
1344
N/A
Book picture is for illustrative purposes only, actual binding, cover or edition may vary.
This is a used book. We do our best to provide good quality books for you to read, but there is no escaping the fact that it has been owned and read by someone else previously. Therefore it will show signs of wear and may be an ex library book
Trustpilot