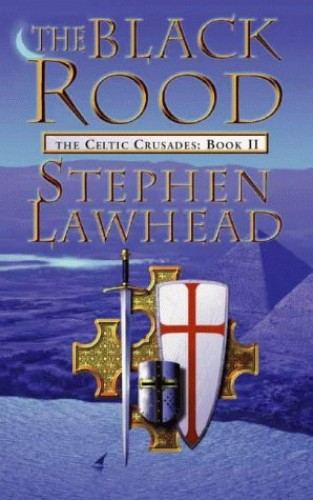 The Black Rood
by Stephen Lawhead

Duncan knows little of the Great Crusade until his uncle, Torf-Einar, reappears with news that the holy Cross of the Crucifixion - the Black Rood - has been discovered and is in the possession of the Knights Templar.

Against his father, Murdo's, wishes, he sets off on a dangerous quest to return it to Scotland, accompanied only by his friend, the monk Padraig. The quest leads them to Armenia, Syria and Egypt, and soon the two become drawn into the dark intrigues of the Templars, who have begun to assert their power throughout the new kingdoms of the Holy Land.

This magnificent and exciting historical fantasy recounts the bloodiest of all times - the early years of the last millennium - when treachery and brutal battle were commonplace, and men often survived by faith alone.

`Powerful and deeply moving. The Iron Lance is an engrossing read'
Starburst

Born and raised in America, Lawhead moved to the UK, to Oxford, in order to research into Celtic legend and history. He lives in Iffely with his wife, writer Alice Slaikeu Lawhead, and their two sons, Ross and Drake.

GOR000726228
The Black Rood: The Celtic Crusades Book Two by Stephen Lawhead
Stephen Lawhead
Used - Very Good
Paperback
HarperCollins Publishers
2000-12-20
528
0006483224
9780006483229
N/A
Book picture is for illustrative purposes only, actual binding, cover or edition may vary.
This is a used book - there is no escaping the fact it has been read by someone else and it will show signs of wear and previous use. Overall we expect it to be in very good condition, but if you are not entirely satisfied please get in touch with us.