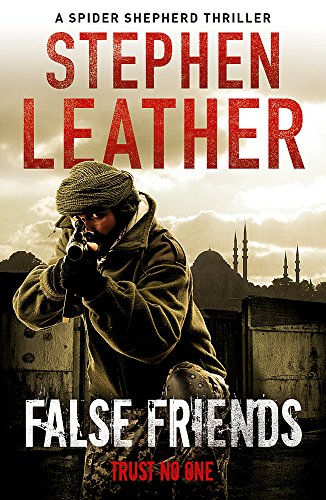 The ninth book in the bestselling Dan 'Spider' Shepherd series.

The most wanted man in the world is dead. Now those loyal to him seek revenge.

When Navy Seals track down and kill Osama Bin Laden in Pakistan, it's obvious there was a traitor on the inside. After the false friends are revealed to be two British students, Malik and Chaudhry - former Islamic fundamentalists recruited by MI5 - they become targets themselves.

Dan 'Spider' Shepherd must teach the pair how to survive undercover with al-Qaeda closing in. But Spider is not used to playing the handler. And with the line between mentor and friend beginning to blur, and a terrorist plot putting thousands of lives at stake, can he protect everyone before it's too late?

Let Spider draw you into his web, you won't regret it. * Sun *
As tough as British thrillers get ... gripping. * Irish Independent *
Explores complex contemporary issues while keeping the action fast and bloody. * Economist *

GOR004399967
False Friends: The 9th Spider Shepherd Thriller by Stephen Leather
Stephen Leather
The Spider Shepherd Thrillers
Used - Very Good
Paperback
Hodder & Stoughton General Division
2012-12-06
480
0340925019
9780340925010
N/A
Book picture is for illustrative purposes only, actual binding, cover or edition may vary.
This is a used book - there is no escaping the fact it has been read by someone else and it will show signs of wear and previous use. Overall we expect it to be in very good condition, but if you are not entirely satisfied please get in touch with us.