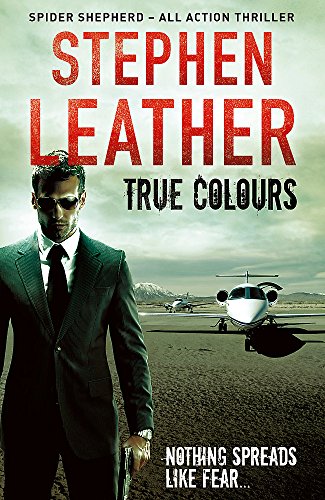 The Russian oligarchs are the world's new elite. They treat the world as their plaything, travelling without borders and living lives of unimaginable luxury without fear or restraint.

But when an assassin starts killing off some of the world's richest men, an oligarch with friends in high places seeks the protection of MI5. And Spider Shepherd is placed in the firing line.

But while Shepherd has to save the life of a man he neither likes nor respects, he has to deal with a face from his past. The Taliban sniper who put a bullet in his shoulder turns up alive and well and living in London.

And Shepherd is in no mood to forgive or forget.

Let Spider draw you into his web, you won't regret it. * Sun *
As tough as British thriller writers get . . . gripping. * Irish Independent *
A writer at the top of his game. * Sunday Express *

GOR005307233
True Colours: The 10th Spider Shepherd Thriller by Stephen Leather
Stephen Leather
The Spider Shepherd Thrillers
Used - Very Good
Paperback
Hodder & Stoughton General Division
2013-11-21
496
1444736566
9781444736564
N/A
Book picture is for illustrative purposes only, actual binding, cover or edition may vary.
This is a used book - there is no escaping the fact it has been read by someone else and it will show signs of wear and previous use. Overall we expect it to be in very good condition, but if you are not entirely satisfied please get in touch with us.