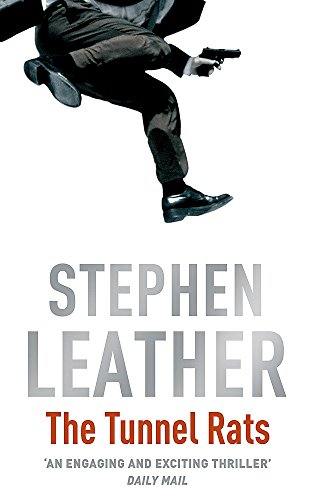 The Tunnel Rats
by Stephen Leather

In Stock
£2.99
The Vietnam War provides the vital clue to a brutal murder in this powerful thriller of buried secrets and retribution.
Very Good Good
9 in stock

The Tunnel Rats by Stephen Leather

Two murders, thousands of miles apart: one in London, one in Bangkok.

The bodies are brutally mutilated, an ace of spades impaled upon their chests. In Washington, a US senator receives photographs of the corpses. And realises that his past has come back to haunt him.

Nick Wright is the detective trying to solve the mystery of the double killing. His hunt for a motive takes him to the Vietnam, where the American tunnel rats fought the dirtiest battle of the war against the Viet Cong.

But his search places him in grave danger with a killer determined to protect the secrets of the tunnels. At whatever cost . . .

'One of his best ... ingenious ... the tension is continuous, increasing in a crescendo as the tale reaches its conclusion' -- Oxford Times 'Stephen Leather should be nestling in your bookshelves alongside Frederick Forsyth and Jack Higgins ... authentic ... exciting stuff with plenty of heart palpitating action gingered up by mystery and intrigue ... Leather is an intelligent thriller writer' -- Daily Mail 'A well-constructed and fast-moving plot ... stunning ... another top-notch thriller' -- Yorkshire Evening Post 'A well-written thriller - a powerful tale of cover-ups, deceit, revenge, intense claustrophobia and deadly intent' -- Birmingham Evening Mail 'Leather has a gift for making pages fly by as bodies pile up, tension builds and clues drop parsimoniously; effective, economical characterizations give the plot just enough depth to captivate readers without hampering the rapid-fire narrative.' -- Publishers Weekly on THE TUNNEL RATS

GOR001125080
The Tunnel Rats by Stephen Leather
Stephen Leather
Used - Very Good
Paperback
Hodder & Stoughton General Division
1998-07-02
512
0340689544
9780340689547
N/A
Book picture is for illustrative purposes only, actual binding, cover or edition may vary.
This is a used book - there is no escaping the fact it has been read by someone else and it will show signs of wear and previous use. Overall we expect it to be in very good condition, but if you are not entirely satisfied please get in touch with us.