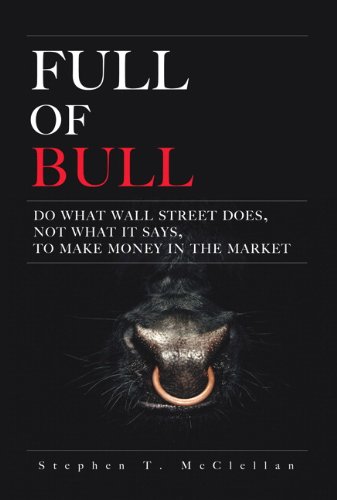 Full of Bull: Do What Wall Street Does, Not What It Says, To Make Money in the Market by Stephen T. McClellan

"I am going to initiate coverage on this book: BUY! The title perfectly encompasses the theme of the book. Stephen McClellan, a Wall Street analyst for 32 years, highlights common practices of research analysts and what they mean for individual investors. This is a quick read, filled with anecdotes from Stephen's long career and his sound investment advice. "Full of Bull" does not contain get rich quick schemes or any unique trading strategies, just observations from one of the industries greatest analysts."

"Only Stephen McClellan could have written this book. As a senior statesman of industry analysts, Steve has worked in the inner circles of Wall Street for over thirty years. When Steve talks, everyone in the industry listens. This book is like a college extension course for investors, and it's taught by the Dean."

"Steve McClellan has drawn on an insider's lifetime view of how Wall Street really works to produce a practical and entertaining book of advice for investors. Whether you are a new or experienced investor you'll get something valuable out of it, including more than a few chuckles."

"Steve McClellan's Full of Bull provides a long overdue insight into the confusing maze of Wall Street analysis and stock recommendations. This book exposes The Street's "insider code" and provides both a cautionary tale and an indispensable guide into the Byzantine world of investment analysis."

"Steve McClellan is one of the smartest guys in the investment industry. For years his research helped investors figure out how to get better returns. Now he's collected a career's worth of observations and conclusions about how Wall Street works and how to avoid the mistakes that cost ordinary people millions-no, billions-of dollars everyday. Read this book and have more money for your retirement.''

"Today the typical share is held much less than a year, usually by an institution, speculator, or insider whose gains are at the expense of the under-informed or mis-informed individual investor. Securities analysts are of little help. With his 30+ years of relevant experience, Steve McClellan tells you why and how to better protect yourself if you're an individual investor."

Buy! Outperform! Hold! What are stock analysts really saying? How do you read between the lines, decipher their insider code, put their research in context, and use it to actually make money? Read Stephen McClellan's Full of Bull and find out. For decades, McClellan was one of the Street's leading analysts. He knows exactly how the game is played. Now, for the first time, he reveals the Street's secrets and misleading signals, putting you on a level playing field with the world's biggest institutional investors.

Discover how to do what Wall Street does, not what it says...uncover analysts' hidden influences, biases, and blind spots...react appropriately to upgrades, downgrades, and price targets...decide which research to ignore completely...bring a clear eye to company announcements...avoid the disastrous mistakes individual investors make when they use analyst research. Drawing on his immense experience analyzing top companies, McClellan shows how to do your own research, systematically evaluate a company's prospects, and choose investments based on core principles that work. Forthright and bold, Full of Bull offers objective, focused guidance you should be getting from your broker...but aren't!

Filter out the noise, find the truth, and profit from it

Where to find the Street's best research...

And how to avoid the worst

The real keys to a quality investment

More than 40 principles, strategies, and practices that work

"I am going to initiate coverage on this book: BUY! The title of this book, "Full of Bull; Do What Wall Street Does, Not What it Says, To Make Money in the Market", while rather long, perfectly encompasses the theme of the book. Stephen McClellan, a Wall Street analyst for 32 years, highlights common practices of research analysts and what they mean for individual investors. This is a quick read, filled with anecdotes from Stephen's long career and his sound investment advice. "Full of Bull" does not contain get rich quick schemes or any unique trading strategies, just observations from one of the industries greatest analysts."

Stephen McClellan was a Wall Street investment analyst for 32 years, covering high-tech stocks as a supervisory analyst. He was a First Vice President at Merrill Lynch for 18 years, and ranked on the annual Institutional Investor All-American Research Team 19 consecutive times, the Wall Street Journal Poll for 7 years, and is in the Journal's Hall of Fame. He was a Vice President at Salomon Brothers for 8 years, before that in a similar position at Spencer Trask, and was the industry analyst with the U.S. Department of Commerce before commencing his Wall Street career. Mr. McClellan is a Chartered Financial Analyst (CFA), a member of the New York Society of Security Analysts and the CFA Institute, was President of the New York Computer Industry Analyst Group, and President and Founder of the Software/Services Analyst Group. He has made television appearances on CBS, CNN MoneyLine, CNBC, and Wall Street Week, and given presentations to numerous organizations, conferences, and to companies such as IBM, Apple, Automatic Data Processing, and Electronic Data Systems. Mr. McClellan has published articles in the London Financial Times, New York Times, Forbes, and others. His MBA in Finance is from George Washington University.

Chapter 3: Strategies in Quest of the Ideal Investment 63

GOR002660882
Full of Bull: Do What Wall Street Does, Not What It Says, To Make Money in the Market by Stephen T. McClellan
Stephen T. McClellan
Used - Very Good
Hardback
Pearson Education (US)
2007-10-10
240
013236011X
9780132360111
N/A
Book picture is for illustrative purposes only, actual binding, cover or edition may vary.
This is a used book - there is no escaping the fact it has been read by someone else and it will show signs of wear and previous use. Overall we expect it to be in very good condition, but if you are not entirely satisfied please get in touch with us.