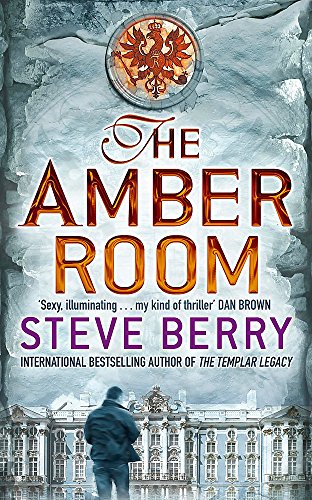 The Amber Room
by Steve Berry

An ingenious thriller from New York Times megaselling author Steve Berry, published in the UK for the first time following the success of THE TEMPLAR LEGACY and THE THIRD SECRET

The Amber Room by Steve Berry

Rachel Cutler loves her job and her kids, and remains civil to her ex-husband, Paul. But everything changes when her father dies under suspicious circumstances, leaving behind clues to a treasure called the Amber Room, one of the most intriguing mysteries of the last century.

Desperate for the truth, Rachel takes off for Germany, with Paul close behind. Before long, they're in over their heads. Locked into a treacherous game with professional killers, Rachel and Paul find themselves on a collision course with the forces of greed, power and history itself...

Steve Berry lives on the coast in Georgia, USA, with his wife and daughter. He is a lawyer who has traveled extensively throughout the Caribbean, Mexico, Europe, and Russia. His first two novels, THE AMBER ROOM and THE ROMANOV PROPHECY, were US bestsellers; his next two, THE THIRD SECRET and THE TEMPLAR LEGACY, were instant New York Times bestsellers. His books have been translated into over 30 languages.

GOR000416785
The Amber Room by Steve Berry
Steve Berry
Used - Very Good
Paperback
Hodder & Stoughton General Division
2007-01-01
400
0340920890
9780340920893
N/A
Book picture is for illustrative purposes only, actual binding, cover or edition may vary.
This is a used book - there is no escaping the fact it has been read by someone else and it will show signs of wear and previous use. Overall we expect it to be in very good condition, but if you are not entirely satisfied please get in touch with us.