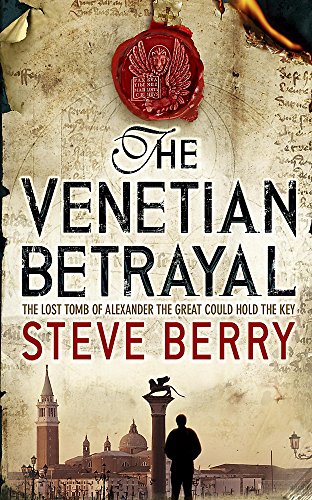 The Venetian Betrayal
by Steve Berry

In Stock
£4.49
A pacy international thriller with a historical twist, from the New York Times bestselling author
Like New Very Good
Only 3 left

A pacy international thriller with a historical twist, from the New York Times bestselling author.

For ex-field agent Cotton Malone the stakes have never been higher: a deadly virus that could wipe out civilisation as we know it - and a cure that lies buried in the past.

A secret international coalition has created a lethal biological weapon. Whoever develops the cure will control the future of global warfare. Yet that cure could already exist, buried centuries before with Alexander the Great.

When Malone hears about it, he joins the hunt for Alexander's long-lost tomb. His quest soon becomes a harrowing fight for truth that has unimaginable repercussions...

Locating the tomb of Alexander the Great has held a fascination for archaeologists and historians ever since his death in 323 BC and it makes perfect plot fodder for this action-packed thriller. Fast paced and engaging. * Sunday Express *
Proves once again that he has a genuine feel for the factual gaps that give history its tantalizing air of the unknown * New York Times *
Berry has gotten better and more ambitious with each of his books...the last 100 pages are as fast-paced as you are likely to find in a novel this year * bookreporter.com *
'Pure intrigue. Pure fun.' * Clive Cussler on Steve Berry *
'A major twist... the puzzles are so much fun... radical thinking of the Gospels that's sure to spark some lively debate . . . pretty grabby stuff' * Wall Street Journal on THE TEMPLAR LEGACY *
'Complex and fast-moving thriller writing, delivered with a great deal of dash, and shades of The Da Vinci Code' * Good Book Guide on THE TEMPLAR LEGACY *
Sexy, illuminating . . . my kind of thriller. * Dan Brown on THE AMBER ROOM *
'Not to be missed. Anagrams and complicated symbology... a complex, well-written, and extremely readable story.' * Library Journal on THE TEMPLAR LEGACY *
'Writes with the self-assured style of a veteran' * Dan Brown *
Steve Berry is a writer on the rise. * David Morrell, author of NIGHTSCAPE and CREEPERS *
Conspiracies and plots abound . . . Berry handles his thriller tradecraft skilfully, [and] his descriptions are stellar. * Booklist on THE THIRD SECRET *
International intrigue, swashbuckling action, indestructible hero from the American South. . . . Not to be missed. * Kirkus Reviews, on THE ROMANOV PROPHECY *

Steve Berry is the New York Times and #1 internationally bestselling author of the Cotton Malone series. His books have been translated into 40 languages with 17,000,000 copies in 51 countries. Steve was born and raised in Georgia, graduating from the Walter F. George School of Law at Mercer University. He was a trial lawyer for 30 years and held elective office for 14 of those years. He is a founding member of International Thriller Writers - a group of more than 2,600 thriller writers from around the world - and served for three years as its co-president. For more information, visit www.steveberry.org.

GOR010518143
The Venetian Betrayal: Book 3 by Steve Berry
Steve Berry
Cotton Malone
Used - Like New
Paperback
Hodder & Stoughton General Division
2008-12-01
560
0340933453
9780340933459
N/A
Book picture is for illustrative purposes only, actual binding, cover or edition may vary.
The book has been read, but looks new. The book cover has no visible wear, and the dust jacket is included if applicable. No missing or damaged pages, no tears, possible very minimal creasing, no underlining or highlighting of text, and no writing in the margins.