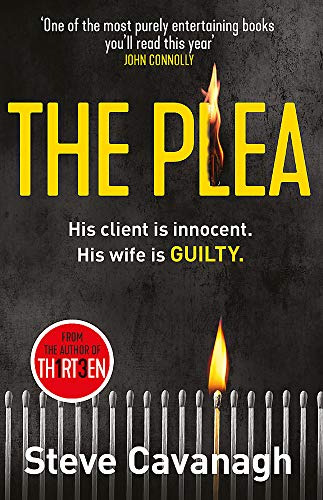 The Plea
by Steve Cavanagh

In Stock
£4.49
A must-read for fans of Lee Child, John Grisham and Michael Connelly. Combining gripping action and ingenious plotting, THE PLEA is the brilliant new legal thriller from the author of THE DEFENCE.
Very Good Good Well Read
35 in stock

The Plea: His client is innocent. His wife is guilty. by Steve Cavanagh

Your client is innocent. Your wife is guilty.
Who would you fight for?

'Quite simply, THE PLEA is one of the most purely entertaining books you'll read this year' John Connolly
'A gripping thriller' Ian Rankin

When David Child, a major client of a corrupt New York law firm, is arrested for murder, the FBI ask con artist-turned-lawyer Eddie Flynn to persuade him to testify against the firm.

Eddie is not someone who is easily coerced, but when the FBI reveal that they have incriminating files on his wife, he knows he has no choice.

But Eddie is convinced the man is innocent, despite overwhelming evidence to the contrary. With the FBI putting pressure on him to secure the deal, Eddie must find a way to prove his client's innocence.

But the stakes are high - his wife is in danger. And not just from the FBI . . .

'What a thriller! Breathlessly brilliant and fiendishly clever' Miranda Dickinson

'Raymond Chandler could have created Eddie Flynn. THE PLEA is Phillip Marlowe and Michael Connolly's Mickey Haller combined, with a bit of Jim Thompson's THE GRIFTERS thrown in. A superb read with a main character destined to be one of the most talked about in crime fiction.' Howard Linskey, author of The Search

If you like John Grisham, Lee Child and Michael Connelly, you will LOVE the gripping and twisty Eddie Flynn series:

A gripping, twisty thriller -- Ian Rankin
Lively, clever and enjoyable . . . Cavanagh writes vividly about American injustice . . . The constant action is interrupted only by absorbing courtroom scenes * THE TIMES *
The Plea reads like an idiosyncratic cross between Elmore Leonard and John Grisham, but bursts with its own individual flavour. * FINANCIAL TIMES *
'Fast-moving, low-punching, street-hustling adventure... Seriously superior airport read.' * TIMES CRIME BOOK CLUB *
Legal thrillers are my blind spot, but I'll always make an exception for Steve Cavanagh. Quite simply, THE PLEA is one of the most purely entertaining books you'll read this year. It's a blast -- John Connolly
'In the crowded field of legal thrillers, Steve Cavanagh stands head and shoulders above the competition, with his skilfully plotted, action-packed and big-hearted Eddie Flynn novels . . . highly intelligent, twist-laden and absolutely unputdownable' -- Eva Dolan
A cleverly constructed legal thriller combined with a classic locked-room mystery. Eddie Flynn is fast becoming one of my favourite fictional heroes and Cavanagh one of my favourite thriller writers * S.J.I. Holliday *
Raymond Chandler could have created Eddie Flynn. THE PLEA is Phillip Marlowe and Michael Connolly's Mickey Haller combined, with a bit of Jim Thompson's THE GRIFTERS thrown in. A superb read with a main character destined to be one of the most talked about in crime fiction -- Howard Linskey
One of the most breathtakingly exciting crime novels I've read this year, a gripping combination of courtroom drama, locked-room mystery and conspiracy theory. * MORNING STAR *
The Plea is explosive, nail-bitingly tense and hilarious by turns; once I started, I just kept reading, and could hardly bear to put it down. Eddie Flynn has the potential to become one of the stars of courtroom drama, and I for one can't wait to see what he will get up to next. -- LIZZIE HAYES

Steve Cavanagh was born and raised in Belfast before leaving for Dublin at the age of eighteen to study Law. He currently practices civil rights law and has been involved in several high profile cases; in 2010 he represented a factory worker who suffered racial abuse in the workplace and won the largest award of damages for race discrimination in Northern Ireland legal history. He holds a certificate in Advanced Advocacy and lectures on various legal subjects (but really he just likes to tell jokes). He is married with two young children. Follow Steve on Facebook at facebook.com/SSCav1 and Twitter @SSCav

GOR008390678
The Plea: His client is innocent. His wife is guilty. by Steve Cavanagh
Steve Cavanagh
Eddie Flynn
Used - Very Good
Paperback
Orion Publishing Co
2017-04-06
400
1409152359
9781409152354
N/A
Book picture is for illustrative purposes only, actual binding, cover or edition may vary.
This is a used book - there is no escaping the fact it has been read by someone else and it will show signs of wear and previous use. Overall we expect it to be in very good condition, but if you are not entirely satisfied please get in touch with us.