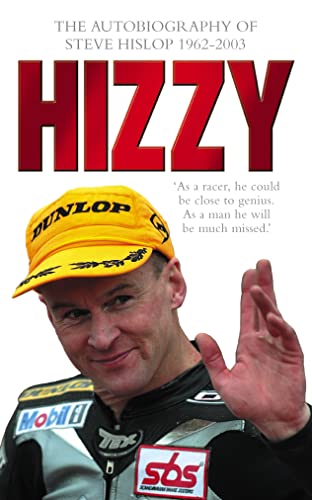 Steve Hislop was one of the most famous motorcycle racers in the world. He had always been a controversial and outspoken character having had many famous clashes and splits with teams and riders over the years, not always to his advantage. Season 2003 was no different. Steve's life was incredible, funny and ultimately tragic.

Steve Hislop was one of the most famous motorcycle racers in the world. He had always been a controversial and outspoken character having had many famous clashes and splits with teams and riders over the years, not always to his advantage. Season 2003 was no different. Steve's life was incredible, funny and ultimately tragic.

Hislop made his debut in 1979 on a bike paid for by his father, but when the latter died of a heart-attack, he embarked on a self-destructive quest that resulted in more crashed bikes and cars than he can remember. Three years later his brother Garry was killed racing at Silloth.

It looked as if he would never race again but while on holiday at the Isle of Man TT races in 1983, he was mesmerised by the sight of Joey Dunlop and he knew he had to try it.

He took to the roads immediately, amassing an amazing career record of 11 wins and was the first rider in history to lap the course at an average speed of over 120mph. Hizzy's TT victories over big name rivals like Joey Dunlop and Carl Fogarty made him a living legend beyond the confines of just the UK. He turned his back on the Isle of Man in 1994, claiming it was too fast and dangerous for modern superbikes.

However, he had already proved he was just as fast on purpose-built short circuits having won the British 250cc championship in 1990 and then went on to win the British Superbike (BSB) title in 1995 and 2002.

Defending a title is always difficult and made even harder when your current team doesn't give you a new contract. However, season 2003 started positively for Steve, inasmuch as he found a new team, but he was sacked half way through the season after a string of poor results on an uncompetitive bike. These events, however, paled into insignificance when Steve was killed in July 2003 when the helicopter he was flying crashed in a remote Scottish border region. His book is a fitting tribute to a motor racing legend.

* `As a racer, he could be close to genius. As a man, he will be much missed.' Mac McDiarmid (Independent)

* `Hizzy became my friend and he was one of the most genuine, open and honest people I've ever met'. Stuart Barker

Steve Hislop was one of Britain's most successful bike riders, winning the British 250cc championship, the British Superbike title twice and the Isle of Man TT a record 11 times.

Stuart Barker is a freelance journalist and regularly writes for MCN. He is also the co-author of Niall Mackenzie's autobiography.

GOR001171404
Hizzy: The Autobiography of Steve Hislop by Steve Hislop
Steve Hislop
Used - Very Good
Paperback
HarperCollins Publishers
2004-03-01
400
0007156413
9780007156412
N/A
Book picture is for illustrative purposes only, actual binding, cover or edition may vary.
This is a used book - there is no escaping the fact it has been read by someone else and it will show signs of wear and previous use. Overall we expect it to be in very good condition, but if you are not entirely satisfied please get in touch with us.