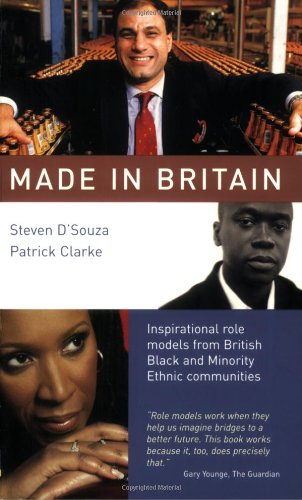 Made In Britain
by Steven D'Souza

In Stock
£9.99
Provides insight into the lives of a selection of role models - real people from British Black and Minority Ethnic backgrounds who have achieved a great deal in very different walks of life.
Very Good
8 in stock

Made In Britain Summary

Made In Britain: Inspirational Role Models from British Black and Minority Ethnic Communities by Steven D'Souza

"A riveting read - and a welcome reminder of why good role models are important."

"Role models raise our aspirations and call us to achieve. This collection of stories is about people who have demonstrated that individuals can make a difference that is meaningful: not just in terms of their own lives, but for business and society as a whole."

We all need to be inspired. We all need help to raise our expectations about what we might be and do in life. We all need somebody to show us what is possible, and to encourage us to both aim higher and look deeper in ourselves.

This is a book that aims to do just that, by providing an insight into the lives of a selection of role models real people from British Minority Ethnic backgrounds who have achieved a great deal in very different walks of life. Some, like actor Colin Salmon are famous. Others, like Karan Bilimoria have started their own hugely successful businesses. Many have contributed to society in very significant ways, by starting a charity, entering politics or rising to a senior position in the police force. What they have in common is that they are all willing to reveal something about themselves that also shows us something about ourselves.

Whether you call yourself Black, White or any shade in between, there is something in this book for you. If it helps you raise your sights, broaden your mind and achieve your dreams, then it will have succeeded.

Steven D'Souza is an accomplished speaker and writer on diversity issues and is currently the Diversity and Organisational Development Manager for Merrill Lynch Europe Plc.

Steven has extensive experience in working with minority ethnic young people in education and also working with minority ethnic staff groups in employment. He has worked as an Assessor for the Home Office Network and the Probation Service Network and is a regular writer for publications such as the Independent 'Opportunity' Magazine and also Hobsons 'Career Guides' for Minority Ethnic Students.

Steven's passions include coaching and volunteer work, and he is committed to working with others to fulfil their potential. Steven sits on the Governing Board of the City of Westminster College, London.

Born on the 4th of July in Jamaica, Patrick Clarke is an experienced Director and general manager, initially specialising in Electrical Engineering. He has now turned his talents to a Directors role in Human Resources and Communications. He describes himself as specialising in people and has spent much of the last 25 year "giving back" to his communities.

As well as the numerous senior roles held by Patrick within EDF Energy and it's former companies, he his particularly proud of the period when he was responsible for "keeping the lights on in London", Head of Networks for London.

Patrick speaks fondly of his many community responsibilities during the past 25 years. He became a school governor a few years after leaving school in the early 80's, became a policeman in the then Police "Force", not service, as a result of the 1981 and 1984 Brixton riots. Immediately after leaving the Police he became one of the early Lay Visitor to police stations in Lambeth (appointed by the Home Office) and eventually vice-chair of that body. He went on to further engage with his communities by taking on a trustee's role within a small housing association responsible for a stock of 400 houses.

Over this period Patrick specialised in spending time in local schools imparting his learning and experience to children. He is currently Chairman and director of a social enterprise and charity responsible for the running of a children's breakfast club, children's day nursery, after school club, community care and outsourced community restaurant.

Never Give Up Partha Dey

Everything is Negotiable Bill Morris

A Lady Among Lords Baroness Udin

The Heart and Soul Of Politics Ram Gidoomal CBE

The Sky's the Limit Mohan Ahad

How Do We Learn from Role Models?

'There Is No Black In The Union Jack'

GOR001135559
Made In Britain: Inspirational Role Models from British Black and Minority Ethnic Communities by Steven D'Souza
Steven D'Souza
Used - Very Good
Paperback
Pearson Education Limited
2005-09-01
248
0273706004
9780273706007
N/A
Book picture is for illustrative purposes only, actual binding, cover or edition may vary.
This is a used book - there is no escaping the fact it has been read by someone else and it will show signs of wear and previous use. Overall we expect it to be in very good condition, but if you are not entirely satisfied please get in touch with us.