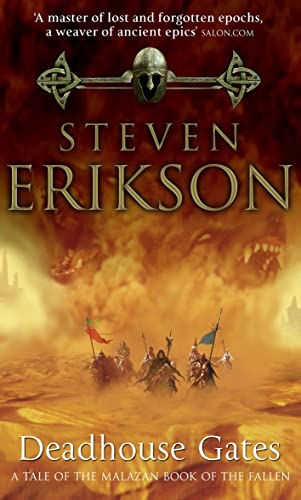 Used Price
£2.99
New RRP £10.99
Free Shipping in the UK
Meanwhile, Coltaine, the charismatic commander of the Malaz 7th Army, will lead his battered, war-weary troops in a last, valient running battle to save the lives of thirty thousand refugees and, in so doing, secure an illustrious place in the Empire's chequered history.
Very Good Good Well Read

Deadhouse Gates: Malazan Book of the Fallen 2 by Steven Erikson

Weakened by events in Darujhistan, the Malazan Empire teeters on the brink of anarchy. In the vast dominion of Seven Cities, in the Holy Desert Raraku, the seer Sha'ik gathers an army around her in preparation for the long-prophesied uprising named the Whirlwind. Unprecedented in its size and savagery, it will embroil in one of the bloodiest conflicts it has ever known: a maelstrom of fanaticism and bloodlust that will shape destinies and give birth to legends... In the Otataral mines, Felisin, youngest daughter of the disgraced House of Paran, dreams of revenge against the sister who sentenced her to a life of slavery. Escape leads her to raraku, where her soul will be reborn and her future made clear. The now-outlawed Bridgeburners, Fiddler and the assassin Kalam, have vowed to return the once god-possessed Apsalar to her homeland, and to confront and kill the Empress Laseen, but events will overtake them too. Meanwhile, Coltaine, the charismatic commander of the Malaz 7th Army, will lead his battered, war-weary troops in a last, valient running battle to save the lives of thirty thousand refugees and, in so doing, secure an illustrious place in the Empire's chequered history. And into this blighted land come two ancient wanderers, Mappo and his half-Jaghut companion Icarium, bearers of a devastating secret that threatens to break free of its chains... Set in a brilliantly-realized world ravaged by anarchy and dark, uncontrollable magic, Deadhouse Gates is the thrilling, brutal second chapter in the Malazan Book of the Fallen. A powerful novel of war, intrigue and betrayal, it confirms Steven Erikson as a storyteller of breathtaking skill, imagination and originality - a new master of epic fantasy.

"A meticulously realised otherworld...ambitious and scrupulously crafted" * SFX *
"A world of evocative magic, brutal warfare and poetry unlike anything I'd read before...the publication of a second novel is always a tense time - was the author a one hit wonder? Fortunately for us, Deadhouse Gates triumphantly proves that this is not the case for Steve Erikson" * Ottakar's Outland website *
"If you're looking for a low calorie dish of light fantasy, this ain't it. If you're looking for a nine-course riot of taste and texture, exotically spiced to make your eyes water, your heart pump faster and your brain do cartwheels inside your cranium, I know a great little Thai place. Or, if you want something analogous to that in your reading, stop at the 'Es' and pick up the latest from Steven Erikson...I can safely say that Deadhouse Gates is one of the best fantasy novels of 2000" -- Neil Walsh * SF Site *
"Erikson afflicts me with awe...his work does something that only the rarest of books can manage: it alters the reader's perceptions of reality" -- Stephen R Donaldson

Archaeologist and anthropologist Steven Erikson's debut fantasy novel, Gardens of the Moon, was shortlisted for the World Fantasy Award and introduced fantasy readers to his epic 'The Malazan Book of the Fallen' sequence, which has been hailed 'a masterwork of the imagination'. This River Awakens was hist first novel, and originally published under the name Steve Lundin. Having lived in Cornwall for a number of years, Steve will be returning to Canada in late summer 2012. To find out more, visit www.malazanempire.com and www.stevenerikson.com

GOR001222712
Deadhouse Gates: Malazan Book of the Fallen 2 by Steven Erikson
Steven Erikson
The Malazan Book Of The Fallen
Used - Very Good
Paperback
Transworld Publishers Ltd
2001-10-01
960
0553813110
9780553813111
N/A
Book picture is for illustrative purposes only, actual binding, cover or edition may vary.
This is a used book - there is no escaping the fact it has been read by someone else and it will show signs of wear and previous use. Overall we expect it to be in very good condition, but if you are not entirely satisfied please get in touch with us.