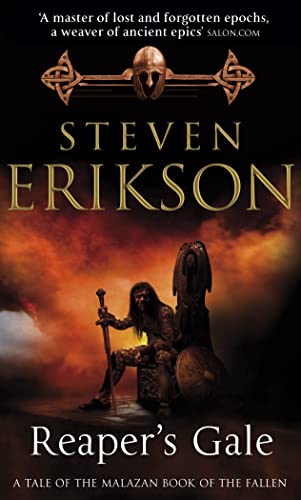 Used Price
£7,49
New RRP £9,99
Free Shipping in the UK
One of them, Fear Sengar, seeks the soul of Scabandari Bloodeye, for he hopes that with its help, they might halt the Tiste Edur and so save the emperor, his brother. But another is Scabandari's old enemy: Silchas Ruin, brother of Anomander Rake.
Very Good Good Well Read

Reaper's Gale: The Malazan Book of the Fallen 7 by Steven Erikson

The Letherii Empire is in turmoil. Rhulad Sengar, the Emperor of a Thousand Deaths, spirals into madness, while the Errant, once a farseeing god, appears suddenly blind to the future. Driven by the corruption and self-interest, the empire edges ever-closer to all-out war with its neighbouring kingdoms. And the great Edur fleet draws ominously ever closer. With Karsa Orlong and Icarium Lifestealer among its warriors, that blood will be spilled is certain. But a band of fugitives look to escape from Lether. One of them, Fear Sengar, seeks the soul of Scabandari Bloodeye, for he hopes that with its help, they might halt the Tiste Edur and so save the emperor, his brother. But another is Scabandari's old enemy: Silchas Ruin, brother of Anomander Rake. He carries scars inflicted by Scabandari, and such bloodshed cannot go unanswered. There is to be a reckoning and it will be on an unimaginable scale...

"The most significant work of epic fantasy since Stephen R. Donaldson's Chronicles of Thomas Covenant" * SF SITE *
"Extraordinarily enjoyable...Erikson is a master of lost and forgotten epochs, a weaver of ancient epics" * SALON.COM *
"This is true myth in the making, a drawing upon fantasy to recreate histories and legends as rich as any found within our culture" * INTERZONE *
"This masterwork of imagination may be the high watermark of epic fantasy" -- GLEN COOK, author of The Black Company series
"Gripping, fast-moving, delightfully dark...Erikson brings a punchy, mesmerizing writing style into the genre of epic fantasy" -- ELIZABETH HAYDON

Archaeologist and anthropologist Steven Erikson's debut fantasy novel, Gardens of the Moon, was shortlisted for the World Fantasy Award and introduced fantasy readers to his epic 'The Malazan Book of the Fallen' sequence, which has been hailed 'a masterwork of the imagination'. This River Awakens was hist first novel, and originally published under the name Steve Lundin. Having lived in Cornwall for a number of years, Steve will be returning to Canada in late summer 2012. To find out more, visit www.malazanempire.com and www.stevenerikson.com

GOR001470598
Reaper's Gale: The Malazan Book of the Fallen 7 by Steven Erikson
Steven Erikson
The Malazan Book Of The Fallen
Used - Very Good
Paperback
Transworld Publishers Ltd
2008-01-05
1280
0553813161
9780553813166
N/A
Book picture is for illustrative purposes only, actual binding, cover or edition may vary.
This is a used book - there is no escaping the fact it has been read by someone else and it will show signs of wear and previous use. Overall we expect it to be in very good condition, but if you are not entirely satisfied please get in touch with us.