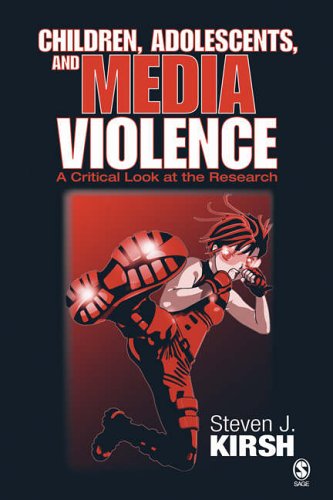 In Stock
£7.49
Providing both historical and theoretical contexts, this book guides the reader through the maze of myth and scientific evidence on media violence effects on children and youth. It evaluates the role of the development processes in media violence research and stresses the importance of methodology in understanding that research.
Very Good
Only 1 left

Children, Adolescents, and Media Violence: A Critical Look at the Research by Steven J. Kirsh

'Children, Adolescents, and Media Violence is a state of the art assessment of this complex issue. Providing both historical and theoretical context, Dr Kirsh expertly guides the reader through the maze of myth and scientific evidence on media violence effects on children and youth. Eminently readable, this book is an essential resource for anyone who wants to understand the scientific methodology, results, and policy implications of media violence research' - Jeanne B Funk, University of Toledo

Children, Adolescents, and Media Violence provides a comprehensive review and critique of the literature related to media violence in all its forms during childhood and adolescence. Special attention is paid to evaluating the role of the development processes in media violence research and to stressing the importance of methodology in understanding that research. The developmental analysis taken by the author allows for the identification of age-related `holes' in the literature and helps the reader to become a critical consumers of the research. The book also provides the most comprehensive overview available of the effects of media violence on children and adolescents.

- a developmental perspective, utilizing three themes throughout the text: critical assessment of research; the importance of development in evaluating research; and identifying the next step in the research process;

- multiple forms of media violence to broaden the scope of discussion;

- discusses and critiques the five major theories utilized to explain the impact of media violence on children and adolescents;

- chapter-opening introductions to draw in readers and to set the stage for the content to come;

"I liked this manuscript tremendously....I thought the author took on the daunting task of summarizing the research on the impact of violent media on children elegantly and compellingly. He walked the very difficult line of concisely summarizing what we know and what we don't know about violent media content on children with enough breadth and depth to expose the important issues about the veracity of the findings I liked his writing style, which was informal but not too colloquial, and I loved the time he took to stop and define difficult methodological and statistical concepts within his descriptions of the research....Yet another reason I'm a fan of this book is I didn't get the sense the author had an axe to grind. That is, he did a wonderful job of responsibly and reasonably reporting what we know about the connections between media violence and a variety of poor outcomes in children. He did a very thorough job, touching upon all the important issues that I could see, and he did it without getting on a 'soap box' and descending into opinion and punditry.." -- Elizabeth A. Vandewater

"This is a very interesting book that addresses an important issue, the influence of media violence on children and adolescents. The book is suitable for use in an advanced undergraduate class or in a specialized graduate seminar devoted to studies of media and children. The author has assembled a broad range of research resources and commentaries on the topic and seems knowledgeable about the issues and concerns in the field."

"The book is exceedingly well written. It is clear, engaging, and readable. This is a substantial accomplishment and I believe it is one of the main strengths of the manuscript."

"Such a book is timely and fills an important niche for professionals in the field and for instruction....Particularly appealing is the fact that it takes a broad view of the entire media violence literature."

-- Craig Anderson
"Children, Adolescents, and Media Violence: A Critical Look at the Research is a state of the art assessment of this complex issue. Providing both historical and theoretical context, Dr. Kirsh expertly guides the reader through the maze of myth and scientific evidence on media violence effects on children and youth. Eminently readable, this book is an essential resource for anyone who wants to understand the scientific methodology, results, and policy implications of media violence research." -- Jeanne B. Funk
"This book, written for those who can read and think at the college graduate level, leaves the reader with enough sophistication to resist the temptation to oversimplify the subject while using his or her new understanding to discuss the matter as an expert. . . I would gladly put Children, Adolescents, and Media Violence in the hands of every school superintendent, policy maker, principal, and politician I could. . . The latest edition of Children, Adolescents, and Media Violence is a must-read for every graduate student in a clinical psychology program as well as every clinician and potential media consultant in the behavioral sciences." -- Joseph H. McCoy * Contemporary Psychology: APA Review of Books *
"College-level collections strong in media history as well as education studies will find plenty to like with Children, Adolescents, and Media Violence: A Critical Look at the Research. Video games are included in chapters which will appeal to undergraduates and graduate students in a range of courses." -- Midwest Book Review

"Kirsh has produced a very logical and systematic approach to examining research concerning children, aggressive behavior, and the influence of media violence."

Steven J. Kirsh is a Professor of Psychology at The State University of New York at Geneseo. During his youth, he reports spending many hours, and dollars, in the video arcades of Ann Arbor, Michigan. Professor Kirsh's primary areas of research focus on the influence of violent media consumption on emotion recognition and social information processing. He has published Media and Youth: A Developmental Perspective (2010) and coauthored the most recent edition of Psychology for Living: Adjustment, Growth, and Behavior Today (2011), as well as numerous scientific articles and book chapters. Professor Kirsh currently teaches courses in the areas of child development, introductory psychology, research methods, and media violence.

GOR010214314
Children, Adolescents, and Media Violence: A Critical Look at the Research by Steven J. Kirsh
Steven J. Kirsh
Used - Very Good
Paperback
SAGE Publications Inc
2006-03-09
432
0761929762
9780761929765
N/A
Book picture is for illustrative purposes only, actual binding, cover or edition may vary.
This is a used book - there is no escaping the fact it has been read by someone else and it will show signs of wear and previous use. Overall we expect it to be in very good condition, but if you are not entirely satisfied please get in touch with us.