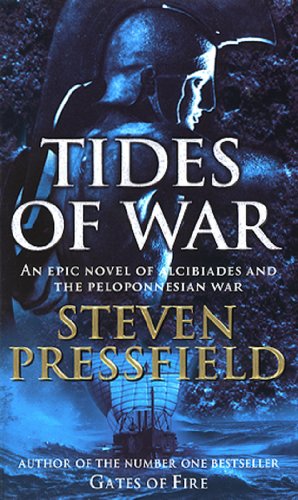 Tides Of War
by Steven Pressfield

In Stock
£4.49
And he would come to dominate the Peloponnesian War, the devastating twenty-seven-year conflict between Athens and Sparta that brought Greece to its knees at the end of the fifth century BC.
Very Good
10 in stock

Tides Of War by Steven Pressfield

ONE MAN. TWO ARMIES. THE FATE OF THE ANCIENT WORLD IN THE BALANCE. ___________________ His name is Alcibiades. Kinsman of Pericles, protege of Socrates, immortalised by Plutarch, Plato and Thucydides, he was an audacious soldier and charismatic leader without equal. And he would come to dominate the Peloponnesian War, the devastating twenty-seven-year conflict between Athens and Sparta that brought Greece to its knees at the end of the fifth century BC. Undefeated on the battlefield, Alcibiades' popularity - and his political aspirations - fed the resentment of his rivals in Athens who secured his death warrant on a trumped-up charge of treason. Escaping to Sparta, he proved instrumental in guiding its legendary army from one military triumph to the next. Ultimately though, it was Athens that would claim his fiercest loyalty, their destinies inextricably intertwined. ___________________ In an epic story filled with triumph and tragedy and ringing to the sound of battle, the acclaimed author of Gates of Fire once more breathes brilliant life into the bones of ancient history to paint a dazzling portrait of a remarkable man whose fortunes mirrored the ebb and flow of the tides of war.

"PRAISE FOR TIDES OF WAR: 'The very qualities that distinguish Ridley Scott's Gladiator are here in greater concentration...it is nigh unbeatable'" * Amazon.co.uk *
"'Extraordinary...Pressfield produces an even greater spectacle - and, in its honest, incremental way, an even greater heart-tugger - than in his acclaimed tale of the battle of Thermopylae ...The political complexities between Sparta and Athens, not to mention the cultural competition between them, are handled with a clarity that enlightens and captivates the reader at once...On every page are colour, splendour, sorrow, the unforgiving details of battle, daily life, and of the fighter's lot. Unashamedly brilliant, epic, intelligent, and moving'" * Kirkus Reviews *
"'Pressfield has an impressive grasp of military history and an even more impressive ability to convey his passion in print. His battlefield scenes rank with the most convincing ever written - you can almost feel the slash of sword on skin and sense the shattering mix of panic, bravery, blood lust and despair'" * USA Today *
"'Every inch the equal of its predecessor' Publishing News 'A brilliant evocation of an heroic age...which sets alight the imagination and which thrills the soul with the trumpet tone of battle'" * Northern Echo *
"'Brings the destruction of ancient Athens vividly to life...Steven Pressfield has literally bookended the golden age of classic Greece...He continues to excel in depth of research, humanization of antiquity and power of description'" * Los Angeles Times *

Steven Pressfield is the author of the novels The Legend of Bagger Vance, Gates of Fire, Tides of War and Last of the Amazons. He lives in Los Angeles.

GOR000991300
Tides Of War by Steven Pressfield
Steven Pressfield
Used - Very Good
Paperback
Transworld Publishers Ltd
2001-03-02
608
0553813323
9780553813326
N/A
Book picture is for illustrative purposes only, actual binding, cover or edition may vary.
This is a used book - there is no escaping the fact it has been read by someone else and it will show signs of wear and previous use. Overall we expect it to be in very good condition, but if you are not entirely satisfied please get in touch with us.