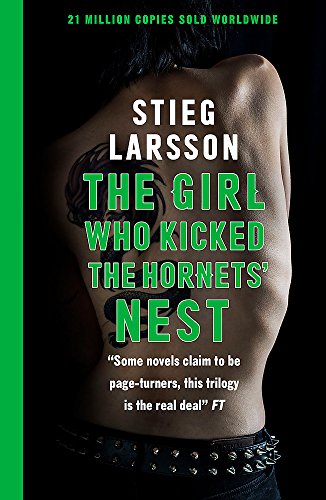 The Girl Who Kicked the Hornets' Nest
by Stieg Larsson

Used Price
£2.99
New RRP £9.99
Free Shipping in the UK
The internationally bestselling trilogy - reissued to tie in with the long-awaited continuation of one of the major publishing phenomenons of modern times
Like New Very Good Good Well Read

The Girl Who Kicked the Hornets' Nest Summary

The Girl Who Kicked the Hornets' Nest by Stieg Larsson

Salander is plotting her revenge - against the man who tried to kill her, and against the government institutions that very nearly destroyed her life. But it is not going to be a straightforward campaign. After taking a bullet to the head, Salander is under close supervision in Intensive Care, and is set to face trial for three murders and one attempted murder on her eventual release.

With the help of journalist Mikael Blomkvist and his researchers at Millennium magazine, Salander must not only prove her innocence, but identify and denounce the corrupt politicians that have allowed the vulnerable to become victims of abuse and violence. Once a victim herself, Salander is now ready to fight back.

Stieg Larsson's phenomenal trilogy is continued in The Girl in the Spider's Web and The Girl Who Takes an Eye for an Eye by David Lagercrantz.

The Girl Who Kicked the Hornets' Nest Reviews

With the spiky and sassy Lisbeth Salander - punkish wild child, traumatised survivor of the 'care' system, sexual adventurer and computer hacker of genius - Larsson created the most original heroine to emerge in crime fiction for many years * Independent *
Complex, satisfying, clever, moral ... a grown-up novel for grown-up readers ... this is why the Millennium Trilogy is rightly a publishing phenomenon all over the world -- Kate Mosse

Stieg Larsson was the Editor-in-Chief of the magazine Expo. He was a leading expert on anti-democratic, right-wing extremist organisations. He died in 2004, soon after delivering the text of the novels that make up the Millennium Trilogy.

GOR008136996
The Girl Who Kicked the Hornets' Nest by Stieg Larsson
Stieg Larsson
a Dragon Tattoo story
Used - Like New
Paperback
Quercus Publishing
2015-06-04
720
0857054058
9780857054050
N/A
Book picture is for illustrative purposes only, actual binding, cover or edition may vary.
This is a used book - there is no escaping the fact it has been read by someone else and it will show signs of wear and previous use. Overall we expect it to be in very good condition, but if you are not entirely satisfied please get in touch with us.