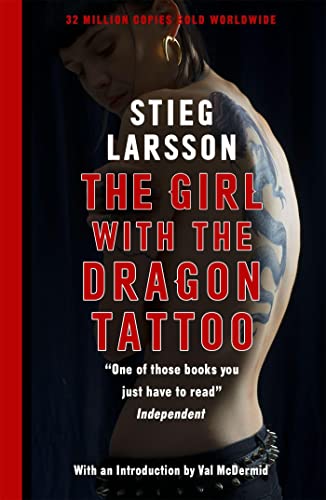 The Girl With the Dragon Tattoo
by Stieg Larsson

Used Price
£2.99
New RRP £8.99
Free Shipping in the UK
The internationally bestselling trilogy - reissued to tie in with the long-awaited continuation of one of the major publishing phenomenons of modern times
Very Good Good Well Read

The Girl With the Dragon Tattoo Summary

The Girl With the Dragon Tattoo by Stieg Larsson

With an Introduction by Val McDermid

Forty years ago, Harriet Vanger disappeared from a family gathering on the island owned and inhabited by the powerful Vanger clan. Her body was never found, yet her uncle is convinced it was murder - and that the killer is a member of his own tightly knit but dysfunctional family.

He employs disgraced financial journalist Mikael Blomkvist and the tattooed, truculent computer hacker Lisbeth Salander to investigate. When the pair link Harriet's disappearance to a number of grotesque murders from forty years ago, they begin to unravel a dark and appalling family history.

But the Vangers are a secretive clan, and Blomkvist and Salander are about to find out just how far they are prepared to go to protect themselves.

The Girl With the Dragon Tattoo Reviews

I doubt you will read a better book this year * Val McDermid *
Intelligent, complex, with a gripping plot and deeply intriguing characters. The author's early death is a great los * Philip Pullman *
What a cracking novel! I haven't read such a stunning thriller debut for years. Brilliantly written and totally gripping * Minette Walters *

Stieg Larsson was the Editor-in-Chief of the magazine Expo. He was a leading expert on anti-democratic, right-wing extremist organisations. He died in 2004, soon after delivering the text of the novels that make up the Millennium Trilogy.

GOR006707910
The Girl With the Dragon Tattoo by Stieg Larsson
Stieg Larsson
a Dragon Tattoo story
Used - Very Good
Paperback
Quercus Publishing
2015-06-04
544
0857054031
9780857054036
N/A
Book picture is for illustrative purposes only, actual binding, cover or edition may vary.
This is a used book - there is no escaping the fact it has been read by someone else and it will show signs of wear and previous use. Overall we expect it to be in very good condition, but if you are not entirely satisfied please get in touch with us.