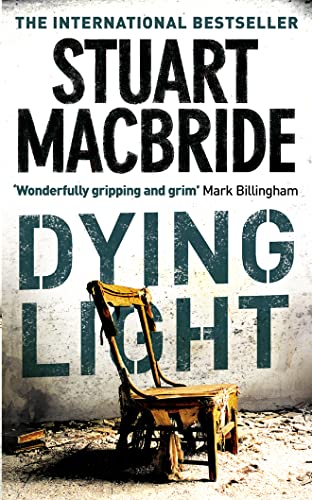 The Number One bestselling detective series from the award-winning Stuart MacBride continues in this second crime thriller. It's summertime in Scotland: the sun is shining, the sky is blue and people are dying...

The Number One bestselling detective series from the award-winning Stuart MacBride continues in this second crime thriller. It's summertime in Scotland: the sun is shining, the sky is blue and people are dying...

She's just the first. How many more will die?

It starts with Rosie Williams, a prostitute, stripped naked and beaten to death down by the docks - the heart of Aberdeen's red light district. For DS Logan McRae it's a bad start to another bad day.

Rosie won't be the only one making an unscheduled trip to the morgue. Across the city six people are burning to death in a petrol-soaked squat, the doors and windows screwed shut from the outside. And despite Logan's best efforts, it's not long before another prostitute turns up on the slab...

An unputdownable serial killer tale packed with mystery and suspense, as well as Stuart MacBride's distinctive grittiness and dark humour.

`DYING LIGHT is a wonderfully gripping and grim second outing for Logan McRae ... Fierce, unflinching and shot through with the blackest of humour; this is crime fiction of the highest order' Mark Billingham

`A terrific writer ... Brilliant ... bodies abound, blood flows freely and McRae is a delight' The Times

`Those who like their crime thrillers diamond hard need look no further than Stuart MacBride ... He has few equals in this area' Independent

GOR001190397
Dying Light (Logan McRae, Book 2) by Stuart MacBride
Stuart MacBride
Logan McRae
Used - Very Good
Paperback
HarperCollins Publishers
2007-01-02
528
0007193165
9780007193165
Short-listed for Theakston's Old Peculier Crime Novel of the Year 2008
Book picture is for illustrative purposes only, actual binding, cover or edition may vary.
This is a used book - there is no escaping the fact it has been read by someone else and it will show signs of wear and previous use. Overall we expect it to be in very good condition, but if you are not entirely satisfied please get in touch with us.