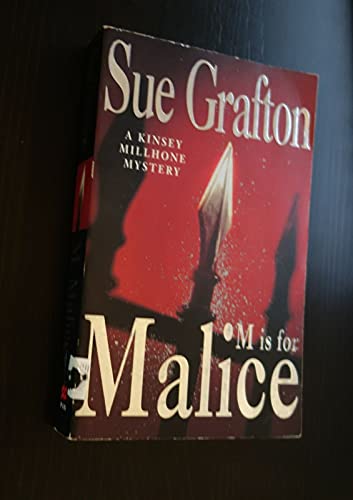 M is for Malice
by Sue Grafton

M is for Malice Summary

M is for Malice by Sue Grafton

'M' is for Malek Construction, the $40 million company that grew out of modest soil to become one of the big three in California.

'M' is for Malek family: four sons now nearing middle age who stand to inherit a fortune - four men with very different temperaments and needs, linked only by blood and money. Eighteen years ago, one of them - angry, troubled and in trouble - went missing.

'M' is for Millhone, now hired to trace that missing black sheep brother.

'Another treat from the alphabet queen' Daily Mail

Sue Grafton has become one of the most popular mystery writers, both here and in the US. Born in Kentucky in 1940, the daughter of the mystery writer C.W. Grafton, she began her career as a TV scriptwriter before Kinsey Millhone and the 'alphabet' series took off. She lives and writes in Montecito, California, and Louisville, Kentucky.

GOR000405108
M is for Malice by Sue Grafton
Sue Grafton
Kinsey Millhone Alphabet series
Used - Very Good
Paperback
Pan Macmillan
1997-11-07
384
0330348760
9780330348768
N/A
Book picture is for illustrative purposes only, actual binding, cover or edition may vary.
This is a used book - there is no escaping the fact it has been read by someone else and it will show signs of wear and previous use. Overall we expect it to be in very good condition, but if you are not entirely satisfied please get in touch with us.