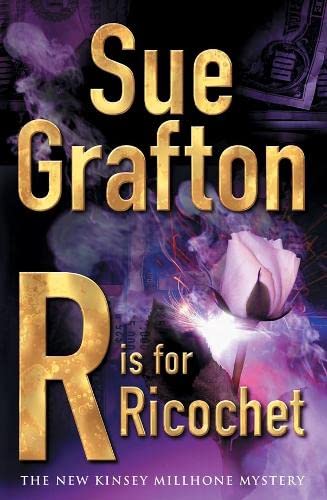 R is for Ricochet
by Sue Grafton

In Stock
£2.99
Kinsey Millhone meets her match in this stunning new mystery
Very Good
Only 3 left

R is for Ricochet Summary

R is for Ricochet by Sue Grafton

Kinsey Millhone, employed by Nord Lafferty to drive his daughter home from her incarceration at the Californian Institute for Women, marvels at the simplicity of the task. But Reba Lafferty emerges feisty and rebellious, and Kinsey is soon fighting to prevent her charge from breaking the conditions of her parole.

As she finds herself befriending the ex-gambler, ex-alcoholic and ex-con, Kinsey discovers that Reba had taken the fall for her boss, also her lover, when he conducted a highly-crafted money laundering scam. Alan Beckwith has so far escaped the clutches of the FBI. Now they believe he is laundering money for a Columbian drug cartel - they just need the proof.

When Kinsey is asked by the police to persuade Reba to unveil crucial evidence guaranteed to put Beckwith behind bars, she doesn't expect cooperation. But when she hears of shocking new information about her lover, Reba is suddenly all too eager to do everything she can to ruin him.

Embroiled in a cunning challenge of wits, and meanwhile bemused by her own blossoming romance, Kinsey must try to control the bitter, angry Reba as she launches her dangerous revenge . . .

Sue Grafton has become one of the most popular female writers, both here and in the US. Born in Kentucky in 1940, the daughter of the mystery writer C. W. Grafton, she began her career as a TV scriptwriter before Kinsey Millhone and the 'alphabet' series took off. She lives and writes in Montecito, California, and Louisville, Kentucky.

GOR000463454
R is for Ricochet by Sue Grafton
Sue Grafton
Used - Very Good
Paperback
Pan Macmillan
2005-04-01
432
0330488341
9780330488341
N/A
Book picture is for illustrative purposes only, actual binding, cover or edition may vary.
This is a used book - there is no escaping the fact it has been read by someone else and it will show signs of wear and previous use. Overall we expect it to be in very good condition, but if you are not entirely satisfied please get in touch with us.