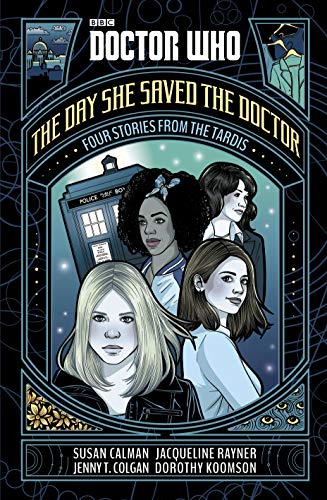 Doctor Who: The Day She Saved the Doctor
by Susan Calman

Doctor Who: The Day She Saved the Doctor Summary

Doctor Who: The Day She Saved the Doctor: Four Stories from the TARDIS by Susan Calman

If it wasn't for the companions, the Doctor probably wouldn't have made it out of so many scrapes. To celebrate the formidable women who have travelled in the TARDIS, dive into four fantastic new adventures with the Doctor, starring Rose, Sarah-Jane, Clara and Bill.

Written by Jenny Colgan, Jacqueline Rayner, Dorothy Koomson and Susan Calman, these stories are the perfect way to celebrate the Doctor's fantastic female heroines, for fans of all ages.

Customer Reviews - Doctor Who: The Day She Saved the Doctor

Doctor Who: The Day She Saved the Doctor Reviews

Susan Calman (Author)
Susan Calman is a comedian, actor, presenter and writer. A regular on The News Quiz, Susan has written four series for BBC Radio 4 and her last tour, The Calman Before The Storm sold out nationally. In 2016 she published her memoir, Cheer Up Love: Adventures in Depression with the Crab of Hate. In 2017, she quickstepped into the nation's hearts as maybe the most joyful contestant ever on the BBC's Strictly Come Dancing. An advocate for LGBT and mental health issues, Susan lives in Glasgow with her wife Lee and their cats.

Jenny T. Colgan (Author)
Jenny Colgan has written twenty-five novels under her own name and, as Jenny T. Colgan, has published extensively in the Doctor Who universe, including the novels In the Blood and Dark Horizons, and the Big Finish audio drama Time Reaver, starring David Tennant and Catherine Tate.

Jacqueline Rayner (Author)
Jacqueline Rayner has written many books, audioplays and comic strips, many of them set in the world of Doctor Who, including the number one bestseller The Stone Rose and two 'Quick Reads' for World Book Day. Before becoming a full-time writer, she worked at BBC Books as an editor on their Doctor Who range.

Dorothy Koomson (Author)
Dorothy Koomson is the award-winning author of twelve novels. Her third book, My Best Friend's Girl, was selected for the Richard & Judy Summer Reads of 2006 and sold more than 500,000 copies. Since her early days of buying comics and working in a well-known comic store, Dorothy has been a die-hard science fiction fan, so she was delighted to work on this anthology.

GOR009116299
Doctor Who: The Day She Saved the Doctor: Four Stories from the TARDIS by Susan Calman
Susan Calman
Doctor Who
Used - Very Good
Hardback
BBC Children's Books
2018-03-08
192
1405929979
9781405929974
N/A
Book picture is for illustrative purposes only, actual binding, cover or edition may vary.
This is a used book - there is no escaping the fact it has been read by someone else and it will show signs of wear and previous use. Overall we expect it to be in very good condition, but if you are not entirely satisfied please get in touch with us.