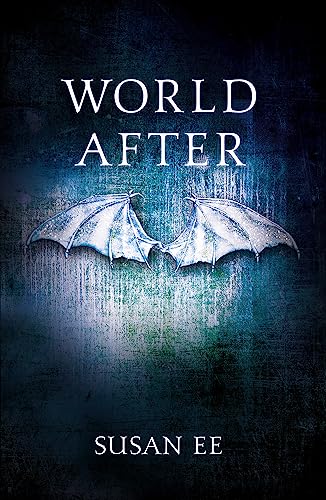 World After
by Susan Ee

The irresistibly compelling BOOK TWO in the long awaited PENRYN AND THE END OF DAYS series. It is THE book we are all waiting with bated breath to read...

World After: Penryn and the End of Days Book Two by Susan Ee

The irresistibly compelling BOOK TWO in the long awaited PENRYN AND THE END OF DAYS series. It is THE book we are all waiting with bated breath to read...

In this sequel to the bestselling fantasy thriller, Angelfall, the survivors of the angel apocalypse begin to scrape back together what's left of the modern world. When a group of people capture Penryn's sister Paige, thinking she's a monster, the situation ends in a massacre. Paige disappears. Humans are terrified. Mom is heartbroken.

Penryn drives through the streets of San Francisco looking for Paige.
Why are the streets so empty? Where is everybody? Her search leads her into the heart of the angels' secret plans, where she catches a glimpse of their motivations, and learns the horrifying extent to which the angels are willing to go.

Meanwhile, Raffe hunts for his wings. Without them, he can't rejoin the angels, can't take his rightful place as one of their leaders. When faced with recapturing his wings or helping Penryn survive, which will he choose?

'Action packed and tense, it will delight even sci-fi refuseniks' * Sunday Mirror *

Susan Ee has eaten mezze in the old city of Jerusalem, surfed the warm waters of Costa Rica, and played her short film at a major festival. She has a life-long love of science fiction, fantasy and horror, especially if there's a touch of romance. She used to be a lawyer but loves being a writer because it allows her souped-up imagination to bust out and go feral.

GOR005317685
World After: Penryn and the End of Days Book Two by Susan Ee
Susan Ee
Penryn and the End of Days
Used - Very Good
Paperback
Hodder & Stoughton General Division
2013-11-21
448
1444778536
9781444778533
N/A
Book picture is for illustrative purposes only, actual binding, cover or edition may vary.
This is a used book - there is no escaping the fact it has been read by someone else and it will show signs of wear and previous use. Overall we expect it to be in very good condition, but if you are not entirely satisfied please get in touch with us.