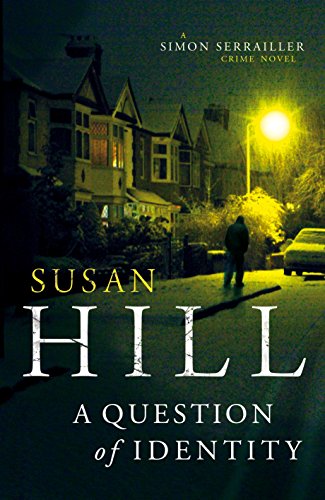 A Question of Identity
by Susan Hill

In Stock
£2.99
The seventh Simon Serrailler crime novel. But Alan Keyes has no birth certificate, no address, no job,no family, no passport, no dental records.
Very Good
Only 2 left

A Question of Identity Summary

A Question of Identity: Simon Serrailler Book 7 by Susan Hill

The seventh Simon Serrailler crime novel. How do you find a killer who doesn't exist? Duchess of Cornwall Close: sheltered accommodation, a mix of bungalows and flats, newly built and not quite finished.Despite the bitterly cold weather, elderly residents are moving in. They don't notice the figure in the shadows. Someone who doesn't mind the cold. Then, one snowy night, an old lady is murdered - dragged from her bed and strangled with a length of flex. DCS Simon Serrailler and his team are aware of bizarre circumstances surrounding her death - but they keep some of these details secret, while they desperately search for a match. All they know is that the killer will strike again, and will once more leave the same tell-tale signature. The break comes when Simon's former sergeant, the ever cheerful Nathan Coates, tracks down a name: Alan Keyes. But Alan Keyes has no birth certificate, no address, no job,no family, no passport, no dental records. Nothing. Alan Keyes does not exist. A Question of Identity introduces a new and chilling element into the Simon Serailler series:it takes the reader inside the mind of a deranged killer.This is Susan Hill's most thrillingly imagined crime novel to date.

A Question of Identity Reviews

"Not all great novelists can write crime fiction but when one like Susan Hill does the result is stunning" -- Ruth Rendell
"Eagerly awaited by all aficionados of crime fiction" -- P.D. James
"This is a crime series that specialises in side-stepping conventions, always to exhilarating effect.. The books succeed in harnessing all the genre's addictive power while maintaining a complexity and fascination all their own." * Independent *

Susan Hill's novels and short stories have won the Whitbread, Somerset Maugham and John Lewellyn Rhys awards and been shortlisted for the Booker Prize. She is the author of over fifty books, including the six previous Serrailler crime novels, The Various Haunts of Men, The Pure in Heart, The Risk of Darkness, The Vows of Silence, The Shadows in the Street and The Betrayal of Trust. The play adapted from her famous ghost story, The Woman in Black, has been running in the West End since 1989; it is also a hugely successful film starring Daniel Radcliffe. Susan Hill was born in Scarborough and educated at King's College London. She is married to the Shakespeare scholar Stanley Wells and they have two daughters. She lives in Gloucestershire, where she runs her own publishing firm, Long Barn Books. www.susan-hill.com

GOR004767313
A Question of Identity: Simon Serrailler Book 7 by Susan Hill
Susan Hill
Simon Serrailler
Used - Very Good
Paperback
Vintage Publishing
2012-10-25
368
0701186577
9780701186579
N/A
Book picture is for illustrative purposes only, actual binding, cover or edition may vary.
This is a used book - there is no escaping the fact it has been read by someone else and it will show signs of wear and previous use. Overall we expect it to be in very good condition, but if you are not entirely satisfied please get in touch with us.