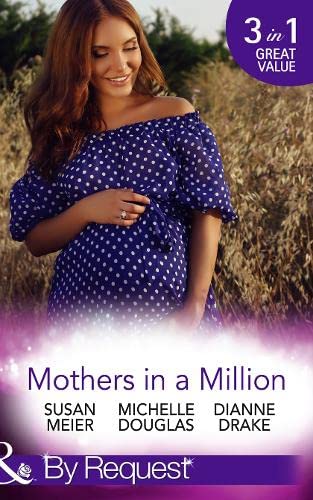 Mothers In A Million
by Susan Meier

In Stock
£1.99
These mother's are about to get something they never expected - a chance at true love!

A Father for Her Triplets by Susan Meier

Mothers In A Million Summary

Mothers In A Million: A Father for Her Triplets / First Comes Baby... (Mothers in a Million, Book 4) / A Child to Heal Their Hearts by Susan Meier

These mother's are about to get something they never expected - a chance at true love!

A Father for Her Triplets by Susan Meier

Missy Johnson is single-handedly raising her triplets and running a wedding cake business - until Wyatt McKenzie returns to town. As she watches the gorgeous bachelor play with her lively brood Missy's beginning to think that five is the perfect number!

Best friends since childhood, Ben and Meg have always kept their relationship platonic - except for one unforgettable kiss. So when Meg decides to become a mother, Ben is happy to help but can he convince Meg that he's more than a friend and ready to settle down?

A Child to Heal their Hearts by Dianne Drake

Childrens doctor Reid Adams has found a new sense of purpose after adopting twin girls, although it cost him his fiance. Now prickly Keera Murphy arrives with an orphaned sickly child and they turn Reid's life upside down, but he knows they're meant to be together...as a family!

Susan Meier spent most of her twenties thinking she was a job-hopper - until she began to write and realised everything that had come before was only research! One of eleven children, with twenty-four nieces and nephews and three kids of her own, Susan lives in Western Pennsylvania with her wonderful husband, Mike, her children, and two over-fed, well-cuddled cats, Sophie and Fluffy. You can visit Susan's website at www.susanmeier.com When MICHELLE DOUGLAS was asked what she wanted to be when she grew up she answered, "A writer." Years later she read an article about romance writing and thought, ooh that'll be fun. She was right. She lives in a leafy suburb of Newcastle on Australia's east coast with her own romantic hero who is the inspiration behind all her happy endings. Visit Michelle at her website www.michelle-douglas.com Starting in non-ficiton, Dianne Drake penned hundreds of articles and seven books under the name JJ Despain. In 2001, she began her romance-writing career with The Doctor Dilemma, published by Harlequin Duets. In 2005, Dianne's first medical romance, Nurse in Recovery was published, and with more than 20 novels to her credit, she has enjoyed writing medical romance for Harlequin Mills & Boon ever since.

GOR008238982
Mothers In A Million: A Father for Her Triplets / First Comes Baby... (Mothers in a Million, Book 4) / A Child to Heal Their Hearts by Susan Meier
Susan Meier
Used - Very Good
Paperback
HarperCollins Publishers
2017-03-23
560
0263929604
9780263929607
N/A
Book picture is for illustrative purposes only, actual binding, cover or edition may vary.
This is a used book - there is no escaping the fact it has been read by someone else and it will show signs of wear and previous use. Overall we expect it to be in very good condition, but if you are not entirely satisfied please get in touch with us.