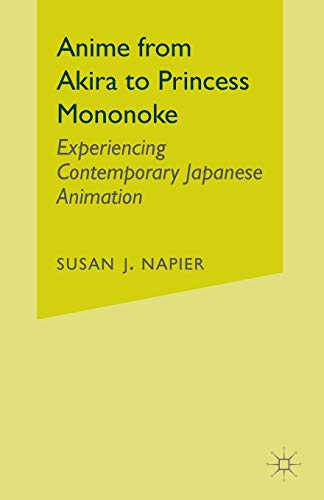 Anime from Akira to Princess Mononoke
by Susan Napier

Out of Stock
£2.39
With the popularity of Pokemon still far from waning, Japanese animation, known as anime to its fans, has a firm hold on American pop culture.
Very Good
Only 0 left

With the popularity of Pokemon still far from waning, Japanese animation, known as anime to its fans, has a firm hold on American pop culture. However, anime is much more than children's cartoons. It runs the gamut from historical epics to sci-fi sexual thrillers. Often dismissed as fanciful entertainment, anime is actually quite adept at portraying important social and cultural issues like alienation, gender inequality, and teenage angst. This book investigates the ways that anime presents these issues in an in-depth and sophisticated manner, uncovering the identity conflicts, fears over rapid technological advancement, and other key themes present in much of Japanese animation.

'This is a riveting and inspiring book. One that I have thoroughly enjoyed reading and from which I have learned a great deal. As a source of concrete information about Japanese animation it is invaluable...On publication it will be the only in-depth, sophisticated study of Japanese animation available in the English language.' - Sharon Kinsella, Research Fellow in Japanese Studies, Cambridge University

'This book...is informative, well-written, insightful, and yet entertaining - an unusual combination. I thoroughly enjoyed reading it...Napier's study...is both generous and critically insightful, based on a thorough knowledge of most of the important genres of anime. I think that this tone of enthusiasm for the material, combined with scholarly rigor, will make the book appealing to a wide audience.' - Sharalyn Orbaugh, Associate Professor of Asian Studies, University of British Columbia

'...Anime from Akira to Princess Mononoke...provides an essential toe-dip into the tsunami of Eastern films that have influenced modern blockbusters such as The Matrix series.' - The Times

Susan J. Napier is Professor of Japanese Studies at Tufts University, USA. She is the author of four books, including The Fantastic in Japanese Literature: The Subversion of Modernity and Anime from Akira to Howl's Moving Castle .

GOR003545915
Anime from Akira to Princess Mononoke: Experiencing Contemporary Japanese Animation by Susan Napier
Susan Napier
Used - Very Good
Paperback
Palgrave USA
2003-05-02
311
0312238630
9780312238636
N/A
Book picture is for illustrative purposes only, actual binding, cover or edition may vary.
This is a used book - there is no escaping the fact it has been read by someone else and it will show signs of wear and previous use. Overall we expect it to be in very good condition, but if you are not entirely satisfied please get in touch with us.