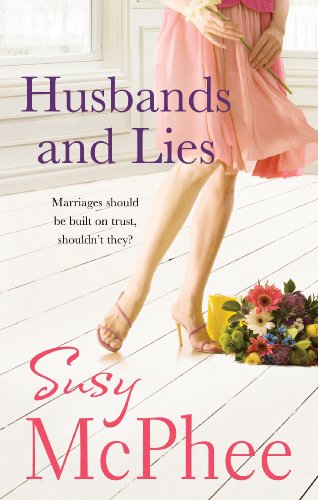 Husbands and Lies
by Susy McPhee

Out of Stock
£4.49
Fran finds the whole idea deeply uncomfortable, but it's hard to refuse your closest friend at the best of times, let alone ignore her dying wishes. 'Footloose' describes himself as divorced, but his photo looks exactly like Fran's husband, Max. Posing as 'Sassy', Fran sends a reply to 'Footloose' and sets out to date her own husband...
Very Good
Only 0 left

Husbands and Lies by Susy McPhee

There are some people you'd do anything for... For Fran that list would include her husband, Max, her daughter, and her best friend, Alison. Only Alison is now desperately ill and she needs Fran's help. She wants to find her husband a new wife, and leave her young daughter with a new mother. Fran finds the whole idea deeply uncomfortable, but it's hard to refuse your closest friend at the best of times, let alone ignore her dying wishes. So Fran reluctantly logs on to an internet dating site, where she stumbles across a startlingly familiar profile. 'Footloose' describes himself as divorced, but his photo looks exactly like Fran's husband, Max. What's a wife to do when she suspects her husband's cheating and can't bear to confront him outright? Posing as 'Sassy', Fran sends a reply to 'Footloose' and sets out to date her own husband... But this increasingly crazy plan leads Max to start to have doubts of his own. Torn between suspicion and love, life for Fran just got very complicated - can her marriage survive?

"a touching and heart warming story and written with real insight and understanding...a very moving debut" * Catherine Alliott *
"A gritty debut. Just keep the tissues handy. *****" * HEAT Magazine *
"This is well thought-out, well written, bittersweet stuff that will make you both weep and laugh. A lovely read from an exciting new author. I look forward to her next." -- Sarah Broadhurst * Love Reading *
"Gripping" * News of the World *
"A skilful, plot-twisting balance of humour and heartbreak." -- Shari Low * Daily Record *

After an attempted career as a spy, which involved training rocket scientists in the former Soviet Union and winning a black belt in Shotokan karate, Susy McPhee settled down to her writing which has won competitions and been published in extracts by Legend Press, Writer's Billboard and most recently Baineth Publications. She lives in Perthshire, Scotland.

GOR001110147
Husbands and Lies by Susy McPhee
Susy McPhee
Used - Very Good
Paperback
Ebury Publishing
2009-01-08
320
0091928567
9780091928568
N/A
Book picture is for illustrative purposes only, actual binding, cover or edition may vary.
This is a used book - there is no escaping the fact it has been read by someone else and it will show signs of wear and previous use. Overall we expect it to be in very good condition, but if you are not entirely satisfied please get in touch with us.