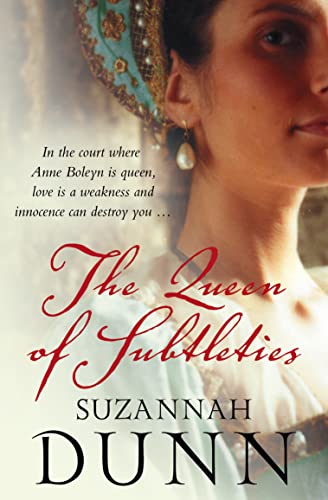 The Queen of Subtleties
by Suzannah Dunn

A tremendously vivid, page-turning and plausible novel that depicts the rise and fall of Anne Boleyn, the most spirited, independent and courageous of Henry's queens, as viewed from both the bedrooms and the kitchens of the Tudor court.

The Queen of Subtleties Summary

The Queen of Subtleties by Suzannah Dunn

A tremendously vivid, page-turning and plausible novel that depicts the rise and fall of Anne Boleyn, the most spirited, independent and courageous of Henry's queens, as viewed from both the bedrooms and the kitchens of the Tudor court.

Everyone knows the story of Anne Boleyn. Henry VIII divorced his longstanding, long-suffering, older, Spanish wife for a young, black-eyed English beauty, and, in doing so, severed England from Rome and indeed from the rest of the western world. Then, when Henry had what he wanted, he managed a mere three years of marriage before beheading his wife for alleged adultery with several men, among them his own best friend and her own brother.

This is the context for Suzannah Dunn's wonderful new novel, which is about - and told by - two women: Anne Boleyn, king's mistress and fated queen; and Lucy Cornwallis, the king's confectioner, an employee of the very highest status, who made the centrepiece of each of the feasts to mark the important occasions in Anne's ascent. There's another link between them, though: the lovely Mark Smeaton, wunderkind musician, the innocent on whom, ultimately, Anne's downfall hinged...

Suzannah Dunn has wit, a mastery of dialogue, brilliant characterization, lack of pretence, and good humour. The Queen of Subtleties adds to that mix a wonderfully balanced, strong story and the result is sensational.

The Queen of Subtleties Reviews

'The Queen of Subtleties' offers a stunningly refreshing way of retelling an old story. I often abandon historical novels nowadays, but I really could not put this one down. It brings Anne Boleyn to life as never before, and, probably for the first time ever in fiction, Henry VIII emerges as a truly credible character in an authentic setting.' Alison Weir, author of The Six Wives of Henry VIII

'Suzannah Dunn is that rarity among contemporary novelists: a genuine stylist. Her prose is like truffles - rich, rare, dark, but never cloying.' Wendy Perriam

`Her ear for the rhythms of speech is unerring, her feeling for the minutiae of experience acute. It takes a good deal of artistry to create the illusion of real life, and she has managed something more difficult still, which is to who us how strange real life can be.' The Times

Suzannah Dunn is the author of nine previous books of fiction: `Darker Days Than Usual', `Blood Sugar', `Past Caring', `Quite Contrary', `Venus Flaring', `Tenterhooks', `Commencing Our Descent', `The Queen of Subtleties' and her most recent success `The Sixth Wife'. She lives in Shropshire.

GOR000487749
The Queen of Subtleties by Suzannah Dunn
Suzannah Dunn
Used - Very Good
Paperback
HarperCollins Publishers
2005-01-03
352
0007139381
9780007139385
N/A
Book picture is for illustrative purposes only, actual binding, cover or edition may vary.
This is a used book - there is no escaping the fact it has been read by someone else and it will show signs of wear and previous use. Overall we expect it to be in very good condition, but if you are not entirely satisfied please get in touch with us.