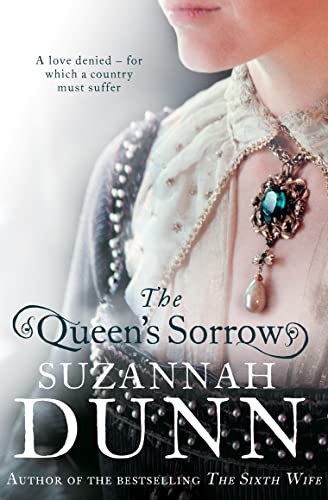 The Queen's Sorrow
by Suzannah Dunn

A queen brought low by love compromised and power abused - the tragedy of Mary Tudor.

The Queen's Sorrow by Suzannah Dunn

A queen brought low by love compromised and power abused - the tragedy of Mary Tudor.

These are desperate times for Mary Tudor. As England's first ruling queen, her joy should be complete when she marries Philip, the dashing Prince of Spain. But despite her ardent devotion, he's making it painfully obvious that he cares little for his new wife - and her struggle to produce an heir only makes him colder towards him. Lonely and depressed, Mary begins to vent her anguish on her people - and England becomes a place of cruelty, persecution and fear.

Mary's terrible fall from grace is seen through the eyes of Rafael, a Spanish sundial maker who is part of the Prince's flamboyant entourage. He becomes the one person that she trusts, but his life - and new-found love - will be caught in the chaos that follows...

Praise for `The Sixth Wife':

`My, what a story...delightfully vulgar and utterly compelling.' The Times

`Suzannah Dunn...weaves a kind of love story that is both moving and believable. This is the Tudor world as seldom seen...The result is historical chick lit at its most charming.' Daily Telegraph

`Dunn [sheds] possible new light on Katharine's marriage to Thomas Seymour and her final days are treated with sympathy and skill.' Tablet

Praise for `The Queen of Subtleties':

'A stunningly refreshing way of retelling an old story...I really could not put this one down. It brings Anne Boleyn to life as never before, and, probably for the first time ever in fiction, Henry VIII emerges as a truly credible character in an authentic setting.' Alison Weir, author of `The Six Wives of Henry VIII'

Suzannah Dunn is the author of nine previous books of fiction: 'Darker Days Than Usual', 'Blood Sugar', 'Past Caring', `Venus Flaring', 'Quite Contrary', 'Tenterhooks', 'Commencing Our Descent', 'Queen of Subtleties' and `The Sixth Wife'. Her most recent novel is `The Confession of Katherine Howard'. She lives in Shropshire.

GOR000370787
The Queen's Sorrow by Suzannah Dunn
Suzannah Dunn
Used - Very Good
Paperback
HarperCollins Publishers
2009-01-05
320
0007258283
9780007258284
N/A
Book picture is for illustrative purposes only, actual binding, cover or edition may vary.
This is a used book - there is no escaping the fact it has been read by someone else and it will show signs of wear and previous use. Overall we expect it to be in very good condition, but if you are not entirely satisfied please get in touch with us.