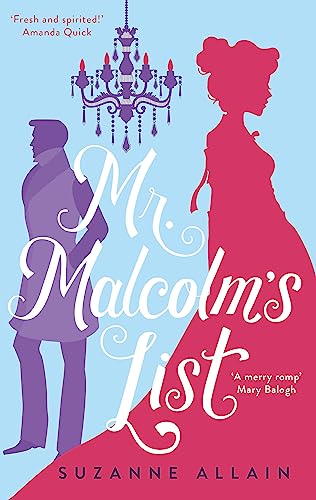 It is a truth universally acknowledged that an arrogant bachelor deserves his comeuppance . . .

The Honourable, excessively handsome, excessively wealth and perhaps a tad egotistical, Mr Malcolm is searching for a wife - but not just any wife. He's armed himself with a list of ideal qualities that his future wife will have to embody. After years of searching, he's beginning to despair of ever finding this paragon . . . until Selina Dalton arrives in town.

Selina, a vicar's daughter of limited means, is thrilled when her friend Julia invites her to London - until she learns it's part of a plot to exact revenge on Mr Malcolm, whose list has been discovered. Using the list, Selina is to play the part of his perfect woman, only to shatter his hopes at the most opportune moment.

Given their instant attraction, Selina is initially reluctant, but when Mr Malcolm begins judging her against his unattainable standards, she decides that it's high time to bring him down a peg or three. For she has some qualifications of her own, and if he is to meet them, he must reveal the real man behind his carefully controlled facade . . .

'This effervescent love story is a charmer' Publishers Weekly

Suzanne Allain delivers a fresh, spirited take on the classic Regency romp. Mr. Malcolm's List is a delightful tale that perfectly illustrates the enduring appeal of the Regency romance. It's all here - the fast, witty banter, the elegant ballrooms, the quirky characters, the charming, strong-willed heroine and the dashing hero who has a thing or two to learn about love
A merry romp! Mr. Malcolm's List is packed with action as one tangled romantic misunderstanding follows fast upon another's heels - to hilarious effect
Suzanne Allain is a fresh new voice in historical romance. Mr. Malcolm's List is a charming, light-hearted confection, with humour, sparkling banter and gently simmering romantic tension; in other words, classic Regency romance
Quick and cute classic regency romance . . . It was witty, hilarious, and contained a cast of upbeat, brooding and feisty characters that all graced the page with subtle Pride and Prejudice undertones. I loved it! * The Nerd Daily *
This witty Austen-esque romp . . . is a sparkling twist on the Regency-era ballroom scenes and misunderstandings that litter historical romance.... Allain's writing is wry and delightful, bursting with witty asides and droll commentary . . . a story that delights and tantalizes * Entertainment Weekly *
Allain's characters are witty and appealing, and the sizzle between Jeremy and Selina is convincing. This effervescent love story is a charmer * Publishers Weekly *
With a feature film already in the works, building on a script also written by Allain, this captivating Regency is sure to be oft-requested and relished by fans of the period * Library Journal *
Hilarious and fast-paced, Mr. Malcolm's List is a bright and refreshing Regency romp * Shelf Awareness *
A cheeky look at the different expectations placed on men versus women during the Regency Era, revealing the limitations society accords individuals in terms of their family connections and personal wealth and education. Both general fiction readers and romance fans looking for a story that will transport them to another time and place, seeking new fictional friends, or hoping to watch characters grow more self-aware and compassionate will revel in this smart love story * Booklist *
Suzanne Allain is a screenwriter who lived in New York and Beijing before returning to her hometown of Tallahassee, Florida, where she lives with her husband. She makes frequent visits to Los Angeles for work, but one of her most memorable trips was to London to see her script MR. MALCOLM'S LIST: OVERTURE being filmed.
GOR011041648
9780349427560
0349427569
Mr Malcolm's List: a bright and witty Austen-esque Regency romp by Suzanne Allain
Suzanne Allain
Used - Very Good
Paperback
Little, Brown Book Group
2020-07-02
256
N/A
Book picture is for illustrative purposes only, actual binding, cover or edition may vary.
This is a used book - there is no escaping the fact it has been read by someone else and it will show signs of wear and previous use. Overall we expect it to be in very good condition, but if you are not entirely satisfied please get in touch with us
Trustpilot