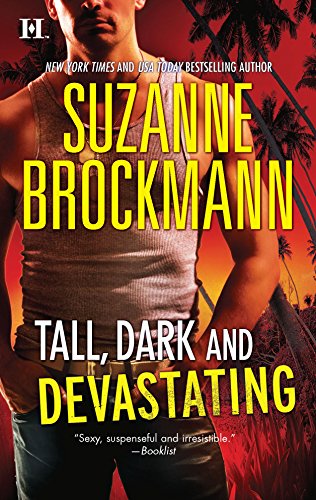 Tall, Dark and Devastating: An Anthology by Suzanne Brockmann

New York Times and USA TODAY bestselling author Suzanne Brockmann has thrilled audiences with her Tall, Dark and Dangerous series. Experience them here, with two classic tales of heroes who face the most daring adventure of all--falling in love.Harvard's Education

Senior Chief "Harvard" Becker believes that there is no room for women in a combat zone. It's too dangerous, too tough...and with P.J. involved, too distracting. He might respect her sharp intellect and her shooting abilities, but he still doesn't want the responsibility of making sure she stays alive. But P.J. isn't a woman who backs down easily, and to her mind, Harvard has a lot to learn. She just doesn't expect him to be so eager to instruct her on other subjects...like trust, desire and maybe even love.

Navy SEAL Crash Hawken awakens in a Washington, D.C., hospital to learn that he is the prime suspect in the assassination attempt on a commanding officer. Charged with treason, conspiracy and murder, he is alone--except for Nell Burns. Nell and Crash have a history--as friends, as lovers. And she knows he could not have committed these crimes. Soon they are on the run, determined to uncover what really happened the night of the attempted assassination. But first they have to survive another day.

Suzanne Brockmann is an award-winning author of more than fifty books and is widely recognized as one of the leading voices in romantic suspense. Her work has earned her repeated appearances on the New York Times bestseller list, as well as numerous awards, including Romance Writers of America's #1 Favorite Book of the Year and two RITA awards. Suzanne divides her time between Siesta Key and Boston. Visit her at www.SuzanneBrockmann.com.

GOR003540682
Tall, Dark and Devastating: An Anthology by Suzanne Brockmann
Suzanne Brockmann
Tall, Dark and Dangerous
Used - Very Good
Paperback
Unknown
0
0373775180
9780373775187
N/A
Book picture is for illustrative purposes only, actual binding, cover or edition may vary.
This is a used book - there is no escaping the fact it has been read by someone else and it will show signs of wear and previous use. Overall we expect it to be in very good condition, but if you are not entirely satisfied please get in touch with us.