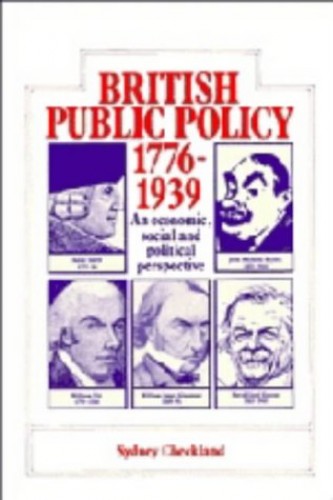 In Stock
£4.49
The evolution of British public policy through the industrial revolution, the Victorian age and the inter-war years to 1939 is an essential element of British history. Sydney Checkland's treatment, first published in 1983, looks at it as a totality, embodying the economic aspects, together with social and welfare provisions and the patterns of ideas affecting both.
Very Good
Only 1 left

British and Public Policy 1776-1939: An Economic, Social and Political Perspective by Sydney Checkland (University of Glasgow)

The evolution of British public policy through the industrial revolution, the Victorian age and the inter-war years to 1939 is an essential element of British history. It is also a necessary preliminary to the understanding of today's policy choices as they confront governments. It has not previously been viewed as a totality, embodying the economic aspects, both macro and micro, together with social and welfare provision and the patterns of ideas affecting both. Sydney Checkland's treatment, first published in 1983, embraces all these aspects, and is set within the changing configuration of class and politics as the franchise extended. As successive governments responded to these challenges they sought to improve the operation of the market economy and to ease the social pressures that it generated. They had to find an acceptable level of consent to what they were doing; this often involved limiting the choices of individuals and of groups. Of the latter, in large-scale business the trade unions were an increasing problem. Reciprocally these interests tried both to limit the actions of governments as these affected themselves and, indeed, to influence the general course of policy. Account is taken of the fact that Britain was not one nation, but four, each with its perspective and aspirations. The pattern increases in complexity with the passage of time, so that the discussion of the First World War and the troubled decades of the twenties and thirties comprise the largest section of the book.

' ... has the merits of a first-rate textbook: comprehensive, reliable and clear, it deals effectively with difficult issues without obscuring or over-simplifying them.' New Society
'The strength of the work lies in its remarkable coherence ... culminating in a wonderfully lucid presentation of the economic and social policy agenda as it had evolved by 1939. Such orderliness will make this a useful book for students.' The Times Higher Education Supplement
' ... the book is a tour de force'. The Times Literary Supplement
' ... an impressive monument to the traditional skills of the best economic and social historians.' Economica

Preface; Introduction; Part I. Industrialisation and War, 1776-1815: 1. The state and the proto-industrial economy of Britain; 2. Core and periphery: England, Wales, Scotland and Ireland; 3. Social values and social policy; Part II. Assimilating the Industrial Revolution, 1815-51: 4. The trend to economic laissez-faire; 5. The social action equation and the zeitgeist; Part III. The Victorian Apogee, 1851-74: 6. The market triumphant; 7. The state and the claims of labour; 8. The advance of social collectivism; Part IV. Industrial Maturity and the Ending of Pre-Eminence, 1874-1914: 9. The continued freedom of the market mechanism; the state-induced changes in its operating conditions; 10. Land and rule in England, Wales, Scotland and Ireland; 11. The emergence of a public sector, chiefly at the local government level; 12. The assertion of the power of labour in industry and politics; 13. Welfare and the social democratic urge; Part V. Total War and Troubled Peace, 1914-39: 14. The policy imperatives of war; the reconstruction debate and the dismantlement of control, 1914-21; 15. The strains of nationalism: Wales, Scotland and Ireland; 16. The advent of peacetime macro-economic management; 17. Micro-management: the restructuring of industry and agriculture; the regions; 18. Micro-management: the public sector; 19. The business response; 20. The political and industrial attitudes of labour; 21. The welfare share: its elements and adequacy; 22. Public policy by 1939; Bibliography; Index.

GOR005036616
British and Public Policy 1776-1939: An Economic, Social and Political Perspective by Sydney Checkland (University of Glasgow)
Sydney Checkland (University of Glasgow)
Used - Very Good
Hardback
Cambridge University Press
1983-03-31
441
0521245966
9780521245968
N/A
Book picture is for illustrative purposes only, actual binding, cover or edition may vary.
This is a used book - there is no escaping the fact it has been read by someone else and it will show signs of wear and previous use. Overall we expect it to be in very good condition, but if you are not entirely satisfied please get in touch with us.