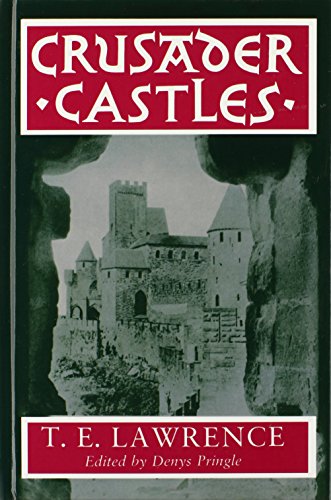 In Stock
£32.99
A new edition of the text on Crusader castles and their relation to the military architecture of the West written by T.E. Lawrence (of Arabia). The original text is reproduced without alteration with notes by the author, not included in the first version, and other editorial notes and details.
Well Read
Only 1 left

A new edition of the classic text on Crusader castles and their relation to the military architecture of the West, written by T. E. Lawrence (of Arabia) while still an undergraduate at Oxford in 1910. At the end of the nineteenth century, it was generally assumed that these castles were the prototype for the massive buildings erected in Northern France and England in the twelfth and thirteenth centuries. Lawrence opposed this view: unlike most earlier writers on the subject, he was already familiar with castles in England, Wales, France and Syria as a result of a series of expeditions made on bicycle or foot, culminating in 1909 in a three-and-a-half month walking tour of the Levant. Although his thesis was to guarantee him a first-class degree in Modern History, its impact on scholarship was slower to take effect. The typescript remained virtually unknown until 1936, a year after the author's death, when it appeared in a limited edition of the Golden Cockerel Press. Crusader Castles is now offered to a wider readership. The original text is reproduced without alteration; but a selection of the pencilled notes which Lawrence added to the typescript, in preparation for a revision that was never made, are included as footnotes, together with additional editorial notes and bibliographical details. Lawrence's work is also assessed in the light of seventy-five years of subsequent research, in an introduction prepared by Denys Pringle.

'a beautiful edition of the dissertation ... This new edition will give Lawrence's lively and stimulating book a fresh lease of life.' Norman Housley, University of Leicester, Journal of Ecclesiastical History
`This is an important book for anyone interested in the development of Crusader military architecture ... The editorial footnotes are superb, and Pringle's new introduction is worth the price of the book ... In effect, this new edition makes Lawrence's work available for the first time to a wide audience.' Speculum - A Journal of Medieval Studies

"Lawrence of Arabia". Author of The Seven Pillars of Wisdom

GOR010302325
Crusader Castles by T. E. Lawrence
T. E. Lawrence
Used - Well Read
Hardback
Oxford University Press
1988-12-08
194
019822964X
9780198229643
N/A
Book picture is for illustrative purposes only, actual binding, cover or edition may vary.
This is a used book. We do our best to provide good quality books for you to read, but there is no escaping the fact that it has been owned and read by someone else previously. Therefore it will show signs of wear and may be an ex library book.