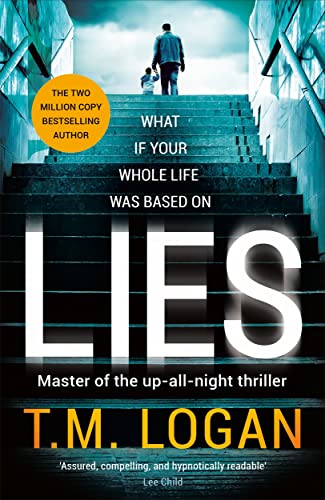 Used Price
£4.99
New RRP £8.99
Free Shipping in the UK
Joe Lynch is just an ordinary happily-married man - until one split-second decision throws his life into crisis.When Joe sees his wife having a confrontation with family friend Ben, it's the first hint that she's been lying to him - about everything.
Very Good Good Well Read

Lies: The number 1 bestselling psychological thriller that you won't be able to put down! by T.M. Logan

The sensational #1 bestselling psychological thriller. 'A tense and gripping thriller' B A Paris, bestselling author of BEHIND CLOSED DOORS. 'So gripping I genuinely found it hard to put down' KL Slater, bestselling author of BLINK. Joe Lynch is just an ordinary happily-married man - until one split-second decision throws his life into crisis. When Joe sees his wife having a confrontation with family friend Ben, it's the first hint that she's been lying to him - about everything. And when he steps in to protect her, a harmless shove knocks Ben to the ground. And he's not moving... Gripping, unputdownable and packed with twists and turns from the first page to the very last, this stunning psychological thriller will make you question whether we can ever really trust the ones we love . . . SEE WHAT READERS ARE SAYING ABOUT THIS GRIPPING PSYCHOLOGICAL THRILLER "Assured, compelling, and hypnotically readable - with a twist at the end I guarantee you won't see coming" Lee Child "A compelling, twisty page-turner, and that's the truth" James Swallow, bestselling author of NOMAD "A terrific page turner, didn't see that twist! A thoroughly enjoyable thriller" Mel Sherrat "Creepy, creepy, creepy . . . a winner if you like thrillers." Woman's Way "Outstanding and very well-written debut psychological thriller.The book was so gripping I genuinely found it hard to put down" KL Slater, bestselling author of BLINK 'I can do no better than recommend Lies, a brilliantly plotted psychological thriller by TM Logan, whom I have no doubt is going to be a major exponent of this genre. You will read this fast-paced page turner with mounting dismay. Exceptional, and highly recommended' Alison Weir "Intense and surreal and utterly amazing . . . that ending just absolutely blew my tiny mind. I didn't see it coming and it was FANTASTIC." Girl vs Books "Cranks up the suspense, tension, complications, revelations and twists to create a gripping, dramatic and exciting ending . . . A great read" Bibliomaniac "Well written and perfectly pitched . . . a great debut thriller" Bloomin Brilliant Books "Gripping, full of twists and turns, it's very hard to put it down!" Bibliophile Book Club DON'T MISS T. M. LOGAN'S NEXT SENSATIONAL PSYCHOLOGICAL THRILLER 29 SECONDS - OUT SOON.

'When Joe Lynch stumbles across his wife driving into a hotel carpark while she's supposed to be at work, he's intrigued enough to follow her in. He knows he should intervene but when it turns violent, Joe has to make a decision about his actions. Then it all starts to go wrong... Creepy, creepy, creepy, but a winner if you like thrillers.' * Woman's Way magazine *
A rollicking read that will leave readers guessing * For the Love of Books *
This is a fast paced,gripping thriller that I would gladly recommend to anyone who enjoys stories about every day people who get caught up in situations that they have no control over.It is very surprisingly a debut book and I look forward to reading more books by TM Logan in the future * Nicki's Life of Crime *
'Gripping, full of twists and turns, it's very hard to put it down! There is a very modern theme running through Lies too. Social media is omnipresent in today's world, and Lies does a really good job of showing it's often time murkier side. It's very believable and I could easily see how it was being used throughout the story.' * Bibliophile Book Club *
'Logan does a perfect job of introducing us to likeable characters with enough humour and honest observations to make it engaging and realistic but then cranks up the suspense, tension, complications, revelations and twists to create a gripping, dramatic and exciting ending.' * Bibliomaniac *
'Racing along at an unprecedented rate, Lies keeps you frantically turning the pages in the pursuit to find out what will happen next. With a well written and perfectly pitched prologue, Logan hooks you in straight away building immediate interest to find out just what this story is going to be about...a great debut thriller.' * Bloomin Brilliant Books *
'outstanding and very well-written debut psychological thriller.The book was so gripping I genuinely found it hard to put down...a consistent domestic thriller; my favourite sort. The tension builds towards the end and I certainly did not expect the final twist which was a thrilling conclusion. I absolutely recommend this book!' * KL Slater, author review 5* *
'I expected an honest-to-god straightforward plotline of threats and mind games. What I did not expect was this well-crafted intriguing plot comprising of twists and turns that will not stop me from finishing it at one go.' * Ramblings and Musings *
'It's intense, insane, enthralling, and the chapters literally whiz by, helped massively by the fact that one chapter blends SO seamlessly into the next one that you just can't help but keep reading, until your eyes are incredibly sore because you've been starting at your Kindle screen for over 4 hours. It's INSANE. It was intense and surreal and utterly amazing, even when I put the book down, even for a toilet break, I was thinking about it and that ending just absolutely blew my tiny mind. I didn't see it coming and it was FANTASTIC.' * Girl Vs Books *
'LIES, is a humdinger of a read. It made me uncomfortable. It made me angry (for Joe, at Joe and about what was happening TO Joe)...It is nicely paced, well balanced and a damned good thriller with some clever wee twists that caught me out. Lies comes highly recommended for fans of domestic thrillers. Ready for an emotional whirlpool? Then you are ready for Lies.' * Grab This Book *
'This was a cracker of a read with some excellent characterisations and as you may have guessed from the book description and tagline, has many twists and turns...if you like a fast paced story that will take you on a rollercoaster of a read, then this is a book that I have no hesitation in recommending. I really enjoyed this debut thriller and can't want to see what the author comes up with next.' * My Reading Corner *
'This is a very fast-paced thriller...it had me hooked.. it is fun, quick read that I would recommend and I'm looking forward to reading whatever TM Logan publishes next.' * Rather too fond of books *
'I know it's early, but Lies is one of my favorite reads of 2017 so far! I just loved it!...If you're looking for a fast paced psychological thriller, this is the book for you! I highly recommend it' * The Blonde Likes Books *
An explosive novel that grips you from the first page and blows your mind with an ending that you would never have imagined. It is expertly written by someone who is up to date with the latest technology and shows just how vulnerable we are to people taking over and manipulating our lives in cyberspace and the devastating consequences of these actions over which we have no control. After reading this book you will modify your privacy settings if you have a Facebook account! * Breakaway Reviewers *
This was an incredibly fast read and I couldn't put it down. If you want a good cat and mouse thriller mixed with a psychological thriller, then you need to pick this one up! ...the ending threw me for a loop. I certainly did NOT see that coming and for that, a 5 star rating. * Where the Reader Grows *
mystery and tension to the last page...I loved the ending and couldn't have predicted it. Deception being a main theme, I kept trying to guess the truth but couldn't do it until the reveal. The story being told from Joe's perspective made me feel like I was going through the nightmare with him. I made discoveries at the same time that he did and we were both shocked by the twist at the end. * A Haven For Book Lovers *
Probably best begun on a weekend afternoon, in case you feel the temptation to stay up late to find out what happens * Crime Reads *

T.M. Logan's thrillers have sold more than 750,000 copies in the UK and are published in 18 countries around the world. His novel The Holiday was a Richard and Judy Book Club pick and became a Sunday Times bestseller in paperback. Formerly a national newspaper journalist, he now writes full time and lives in Nottinghamshire with his wife and two children. Follow him on Twitter @TMLoganAuthor

GOR008339253
Lies: The number 1 bestselling psychological thriller that you won't be able to put down! by T.M. Logan
T.M. Logan
Used - Very Good
Paperback
twenty7
2017-05-04
528
1785770551
9781785770555
N/A
Book picture is for illustrative purposes only, actual binding, cover or edition may vary.
This is a used book - there is no escaping the fact it has been read by someone else and it will show signs of wear and previous use. Overall we expect it to be in very good condition, but if you are not entirely satisfied please get in touch with us.