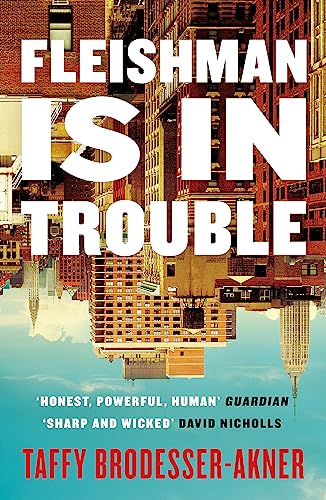 Fleishman Is in Trouble
by Taffy Brodesser-Akner

Used Price
£4.99
New RRP £8.99
Free Shipping in the UK
A BLISTERING SATIRICAL NOVEL ABOUT MARRIAGE, DIVORCE AND MODERN LOVE, BY ONE OF THE MOST EXCITING NEW VOICES IN AMERICAN FICTION
Very Good Good

Fleishman Is in Trouble Summary

Fleishman Is in Trouble: Longlisted for the Women's Prize for Fiction 2020 by Taffy Brodesser-Akner

'This is the novel of the summer . . . There is no one that this book isn't for. I can't believe it's a first novel. Pure brilliance' INDIA KNIGHT, THE SUNDAY TIMES

'Could be one of the books of my entire lifetime. I've never felt so seen' GRACE DENT, GUARDIAN

'Sharp and wicked, insightful and funny, and then suddenly so touching' DAVID NICHOLLS

'This book is a work of utter perfection' ELIZABETH GILBERT

Finally free from his nightmare marriage, Toby Fleishman is ready for a life of online dating and weekend-only parental duties. But as he optimistically looks to a future that is wildly different from the one he imagined, his life turns upside-down as his ex-wife, Rachel, suddenly disappears.

While Toby tries to find out what happened - juggling work, kids and his new, app-assisted sexual popularity - his tidy narrative of a spurned husband is his sole consolation. But if he ever wants to really understand where Rachel went and what really happened to his marriage, he is going to have to consider that he might not have seen it all that clearly in the first place . . .

A BLISTERING SATIRICAL NOVEL ABOUT MARRIAGE, DIVORCE AND MODERN RELATIONSHIPS, BY ONE OF THE MOST EXCITING NEW VOICES IN AMERICAN FICTION

'The most astonishingly brilliant Trojan horse of a novel' DOLLY ALDERTON

'Brimming with wisdom and utterly of this moment . . . Taffy Brodesser-Akner's debut is that rare and delicious treat: a page turner with heft' MARIA SEMPLE

'It is a Great Novel . . . It has depth, wit, nuance and life. Heartbreaking and funny' NIGELLA LAWSON

Fleishman Is in Trouble Reviews

Taffy Brodesser-Akner is a staff writer for The New York Times Magazine. She has also written for GQ, ESPN the Magazine, and many other publications. Fleishman Is in Trouble is her first novel.

GOR010519302
Fleishman Is in Trouble: Longlisted for the Women's Prize for Fiction 2020 by Taffy Brodesser-Akner
Taffy Brodesser-Akner
Used - Very Good
Paperback
Headline Publishing Group
2020-04-21
384
1472267079
9781472267078
N/A
Book picture is for illustrative purposes only, actual binding, cover or edition may vary.
This is a used book - there is no escaping the fact it has been read by someone else and it will show signs of wear and previous use. Overall we expect it to be in very good condition, but if you are not entirely satisfied please get in touch with us.