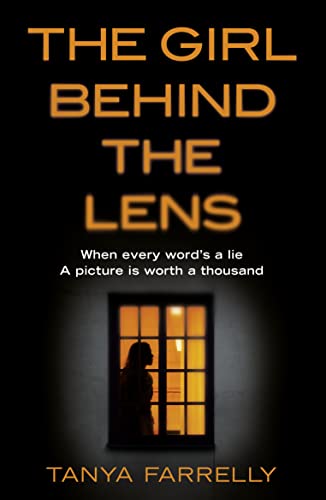 The Girl Behind the Lens
by Tanya Farrelly

When every word's a lie, a picture is worth a thousand

A dark psychological thriller about the secrets that destroy us, perfect for fans of THE COUPLE NEXT DOOR, BEHIND CLOSED DOORS and THE GIRLFRIEND.

The Girl Behind the Lens Summary

The Girl Behind the Lens by Tanya Farrelly

When every word's a lie, a picture is worth a thousand

A dark psychological thriller about the secrets that destroy us, perfect for fans of THE COUPLE NEXT DOOR, BEHIND CLOSED DOORS and THE GIRLFRIEND.

Oliver Molloy never meant to hurt his wife. It was an accident, not his fault. A respected lawyer, he needs to make sure no one finds out the truth. But there's someone watching him, waiting for him to slip up.

Photography student Joanna Lacey has always been close to her mother. But when Rachel Arnold turns up on her doorstep, Joanna's world falls apart. The father she never knew has been found in the canal - a married man, now dead.

Joanna and Oliver's paths cross when they meet at the funeral. Convinced everyone she loves is lying to her, Joanna turns to him for help. But Oliver is a far more dangerous liar than Joanna knows...

The Girl Behind the Lens Reviews

`An absorbing psychological thriller ... Oliver Malloy is one of the most skin-crawlingly creepy characters to appear in Irish Crime Fiction this year' Declan Burke, Irish Times

`For a debut novel, The Girl Behind the Lens is quite spectacular' The London Economic

Tanya Farrelly works as an EFL teacher and facilitates Creative Writing classes for South Dublin County Council. She holds a PhD in Creative Writing from Bangor University and her work has been shortlisted for several prizes, such as the Hennessy and the Francis MacManus Awards. In 2008 she was named runner-up in the William Trevor International Short Story Competition and her debut short story collection, When Black Dogs Sing, was published by Arlen House in September 2016. The Girl Behind the Lens is her first full-length novel.

Tanya lives in Wicklow with her husband and runs a monthly Spoken Word event called Staccato.

GOR010194991
The Girl Behind the Lens by Tanya Farrelly
Tanya Farrelly
Used - Like New
Paperback
HarperCollins Publishers
2016-12-15
272
0008215111
9780008215118
N/A
Book picture is for illustrative purposes only, actual binding, cover or edition may vary.
This is a used book - there is no escaping the fact it has been read by someone else and it will show signs of wear and previous use. Overall we expect it to be in very good condition, but if you are not entirely satisfied please get in touch with us.