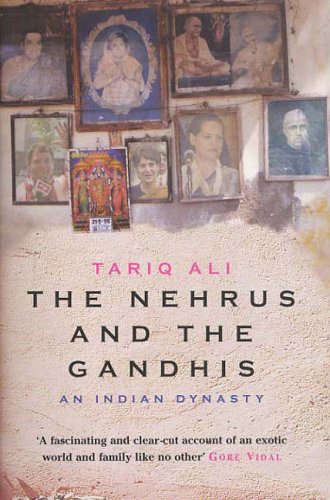 The Nehrus and the Gandhis
by Tariq Ali

In Stock
£6.49
Newly revised, this is a major and authoritative work on one of India's greatest families
Good
Only 3 left

The Nehrus and the Gandhis Summary

The Nehrus and the Gandhis: An Indian Dynasty by Tariq Ali

The Nehrus are a dynasty without precedent in the modern world; nowhere else and at no other time in recent history has a single family wielded such enduring and pervasive power over the country - and the electorate - they serve. From Jawaharlal Nehru to his daughter, Indira Gandhi, and from there, via Sanjay and Rajiv to - most recently - Sonia, this remarkable family have consistently established both the parameters and rhetoric of India's political development.

In the eighties, Tariq Ali made several trips to India, meeting a wide range of political and public figures, including Mrs Gandhi, and leaders of both the Congress and Opposition parties. The Nehrus and the Gandhis, first published in 1985, was the result. Now updated to include the most recent chapters in India's political history, it remains as relevant as ever, offering an intricate and revealing portrait of power, seen through the continued rise - and eyes - of one family.

Tariq Ali was born in Lahore (then India and now Pakistan). Well-known as a political and social commentator, he has worked as a film-maker, playwright and producer, is the author of over a dozen books and a long-standing editor of the New Left Review. He lives in London.

GOR003646829
The Nehrus and the Gandhis: An Indian Dynasty by Tariq Ali
Tariq Ali
Used - Good
Paperback
Pan Macmillan
2005-03-18
368
0330438395
9780330438391
N/A
Book picture is for illustrative purposes only, actual binding, cover or edition may vary.
This is a used book - there is no escaping the fact it has been read by someone else and it will show signs of wear and previous use. Overall we expect it to be in very good condition, but if you are not entirely satisfied please get in touch with us.