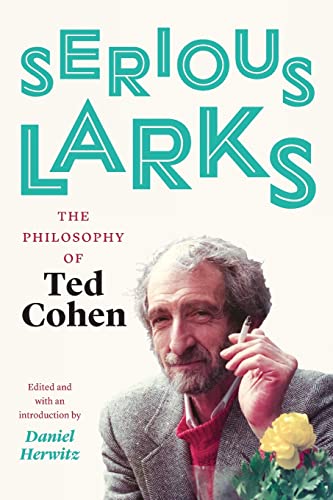 Serious Larks: The Philosophy of Ted Cohen by Ted Cohen

Ted Cohen was an original and captivating essayist known for his inquisitive intelligence, wit, charm, and a deeply humane feel for life. For Cohen, writing was a way of discovering, and also celebrating, the depth and complexity of things overlooked by most professional philosophers and aestheticians--but not by most people. Whether writing about the rules of baseball, of driving, or of Kant's Third Critique; about Hitchcock, ceramics, or jokes, Cohen proved that if you study the world with a bemused but honest attentiveness, you can find something to philosophize about more or less anywhere.

This collection, edited and introduced by philosopher Daniel Herwitz, brings together some of Cohen's best work to capture the unique style that made Cohen one of the most beloved philosophers of his generation. Among the perceptive, engaging, and laugh-out-loud funny reflections on movies, sports, art, language, and life included here are Cohen's classic papers on metaphor and his Pushcart Prize-winning essay on baseball, as well as memoir, fiction, and even poetry. Full of free-spirited inventiveness, these Serious Larks would be equally at home outside Thoreau's cabin on the waters of Walden Pond as they are here, proving that intelligence, sensitivity, and good humor can be found in philosophical writing after all.

"I met Ted Cohen once at The University of Michigan where he was giving a wonderfully funny and wonderfully philosophical talk on jokes. Unusual subject for a philosopher, I thought. Now reading Serious Larks, I see how unusual a philosopher he was, whether dealing with jokes and the myriad ways we can find to not enjoy them, or revealing the kindred joys we take in both art and sports. Cohen's philosophy is squarely rooted in the lived and lively life he led, and you would be wise to follow his lead."--Bob Mankoff, Cartoon and Humor Editor for Esquire
"It is a very rare pleasure to read Cohen's essays. He was a true original who alwaystook a fresh approach to a topic, and these essays are gems, bringing together in one place the distinctive combination that is Cohen: the sharpest philosophical acuity, a wonderful writing style-lucid, invariably clear, rich in implication (and thus they make one think), a sense of adventure and discovery (often about things one took for granted), and-perhaps most distinctively Cohenesque, a sense of companionship and humane presence."--Garry L. Hagberg, Bard College

GOR009958630
Serious Larks: The Philosophy of Ted Cohen by Ted Cohen
Ted Cohen
Used - Very Good
Paperback
The University of Chicago Press
2018-05-14
240
022651126X
9780226511269
N/A
Book picture is for illustrative purposes only, actual binding, cover or edition may vary.
This is a used book - there is no escaping the fact it has been read by someone else and it will show signs of wear and previous use. Overall we expect it to be in very good condition, but if you are not entirely satisfied please get in touch with us.