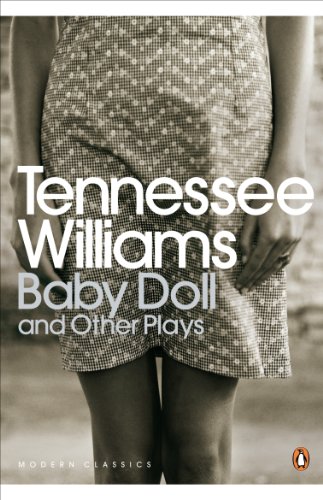 Baby Doll and Other Plays by Tennessee Williams

Contains stories such as "Baby Doll" and "Something Unspoken".

Baby Doll and Other Plays by Tennessee Williams

Tennessee Williams's controversial Hollywood screenplay Baby Doll opens with Archie Lee's teenage bride driving him to distraction, as she has refused to consummate their marriage until the day of her twentieth birthday. Enter wily Sicilian Silva Vaccaro, Archie's rival both in the cotton business and for the affections of the flirtatious Baby Doll, and things reach breaking-point. This volume also contains Something Unspoken, a brilliantly comic study of a wealthy, manipulative Southern spinster, and Summer and Smoke, a sexually charged portrayal of Alma, a sensitive, unmarried minister's daughter, and her childhood love, the wild, sensual doctor's son John.

Tennessee Williams was born in 1911 in Columbus, Mississippi, where his grandfather was the episcopal clergyman. When his father, a travelling salesman, moved with his family to St Louis some years later, both he and his sister found it impossible to settle down to city life. He entered college during the Depression and left after a couple of years to take a clerical job in a shoe company. He stayed there for two years, spending the evenings writing. He entered the University of Iowa in 1938 and completed his course, at the same time holding a large number of part-time jobs of great diversity. He received a Rockefeller Fellowship in 1940 for his play Battle of Angels, and he won the Pulitzer Prize in 1948 and 1955. Among his many other plays Penguin have published The Glass Menagerie (1944), A Streetcar Named Desire (1947), Summer and Smoke (1948), The Rose Tattoo (1951), Camino Real (1953), Cat on a Hot Tin Roof (1955), Orpheus Descending (1957), Sweet Bird of Youth (1959), Period of Adjustment (1960), The Night of the Iguana (1961), The Milk Train Doesn't Stop Here Anymore (1963; revised 1964) and Small Craft Warnings (1972).

GOR004914255
9780141190297
0141190299
Baby Doll and Other Plays by Tennessee Williams
Tennessee Williams
Penguin Modern Classics
Used - Very Good
Paperback
Penguin Books Ltd
2009-03-05
192
N/A
Book picture is for illustrative purposes only, actual binding, cover or edition may vary.
This is a used book - there is no escaping the fact it has been read by someone else and it will show signs of wear and previous use. Overall we expect it to be in very good condition, but if you are not entirely satisfied please get in touch with us
Trustpilot