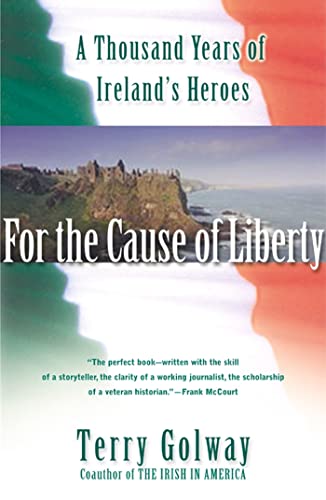 For the Cause of Liberty
by Terry Golway

In Stock
£4.99
The engaging and admirable story of how the Irish have saved themselves, FOR THE CAUSE OF LIBERTY is a peerless work of scholarship, and it offers a fresh context for the ongoing discussion of Ireland's political future.
Very Good
Only 1 left

For the Cause of Liberty Summary

For the Cause of Liberty: A Thousand Years of Ireland's Heroes by Terry Golway

Ireland's struggle for freedom reaches back much further into the annals of history than most of us can imagine. Since the eleventh century, when legendary King Brian Boru united the chieftains of Ireland to resist Viking invasion, countless individual leaders have fought to preserve and protect Ireland's political and cultural autonomy. In a chronicle of unprecedented breadth and authority, FOR THE CAUSE OF LIBERTY tells the stories of these heroes, including both men and women, Catholics and Protestants, who enabled the Irish to free themselves from the yoke of colonial oppression. Journalist Terry Golway reconstructs the entire thousand year history of Irish nationalism, covering each benchmark event in Ireland's political evolution and presenting a vivid, epic tale of both the famous and unsung patriots who changed the course of Ireland's history. Among these are Wolfe Tone, a leader of the 1798 rebellion who cut his own throat rather than submit to a hangman; Kevin Barry, executed at age eighteen rather than turn informer on the eve of independence in 1921; and Bobby Sands, an IRA militant who died on a hunger strike in 1981, calling international attention to the conflict in Northern Ireland.

For the Cause of Liberty Reviews

Frank McCourt The perfect book -- written with the skill of a storyteller, the clarity of a working journalist, the scholarship of a veteran historian.
New York Post A fine and very readable history...as fresh as a just-poured pint of Guinness.
Dennis Smith author of Report from Engine Co. 82 The telling of popular history at its best....Every page vibrates with authenti-city and excitement.
Publishers Weekly An energetic and deeply informative work.

Terry Golway is City Editor and columnist at The New York Observer. He is also a frequent contributor to the Irish Echo, America, American Heritage, The Boston Globe, The New York Times, and other national publications. He is the author of Irish Rebel: John Devoy and America's Fight for Ireland's Freedom and coauthor of The Irish in America, a companion book to the award-winning PBS documentary series.

The Common Name of Irishman

Bloody Protest for a Glorious Thing

The Common Cause of Peace

GOR001412968
For the Cause of Liberty: A Thousand Years of Ireland's Heroes by Terry Golway
Terry Golway
Used - Very Good
Paperback
Simon & Schuster
2001-03-01
400
0684855577
9780684855578
N/A
Book picture is for illustrative purposes only, actual binding, cover or edition may vary.
This is a used book - there is no escaping the fact it has been read by someone else and it will show signs of wear and previous use. Overall we expect it to be in very good condition, but if you are not entirely satisfied please get in touch with us.