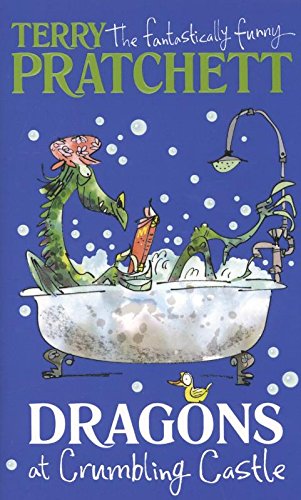 A beautifully illustrated collection of short stories by master storyteller Sir Terry Pratchett, featuring dragons, dinosaurs, cavemen and car races!
Dragons have invaded Crumbling Castle, and all of King Arthur's knights are either on holiday or visiting their grannies. It's a disaster!

Luckily, there's a spare suit of armour and a very small boy called Ralph who's willing to fill it. Together with Fortnight the Friday knight and Fossfiddle the wizard, Ralph sets out to defeat the fearsome fire-breathers.

But there's a teeny weeny surprise in store...

"Funny, action-packed ... a rip-roaring read." The Sun "Full of [Pratchett's] burgeoning wit and wordplay ... A delightful romp." Sunday Times "A splendid collection ... rumbustious, irreverent and hilarious." Booktrust "A good choice for the chapter-book set, this is highly recommended for reading aloud to younger children as well ... Pratchett's vast, all-ages fan base will be intrigued by these early offerings, while their accessibility and skillful storytelling will pull in young newcomers to the masterful author's work." Booklist "Charming and funny ... Accompanied by Beech's wiry Quentin Blake-like illustrations, as well as numerous typographical flourishes, this volume will please both its intended audience and older Pratchett completists." Publishers Weekly "Terry Pratchett's youthful short stories, as collected in Dragons at Crumbling Castle, just prove that he has always been what he is ... These stories are far too good for children. Oops, I mean for children not to share with older people. But you knew that." The Bookwitch "A joy to read ... from dragons and wizards to monsters and talking animals, there really is something in each story to appeal to everyone." whatsgoodtogo.co.uk

Terry Pratchett was the acclaimed creator of the global bestselling Discworld series, the first of which, The Colour of Magic, was published in 1983. His fortieth Discworld novel, Raising Steam, was published in 2013. His books have been widely adapted for stage and screen, and he was the winner of multiple prizes, including the Carnegie Medal, as well as being awarded a knighthood for services to literature. He died in March 2015. www.terrypratchett.co.uk @terryandrob

GOR006557381
Dragons at Crumbling Castle by Terry Pratchett
Terry Pratchett
Used - Like New
Hardback
Random House Children's Publishers UK
2014-09-11
352
0857534378
9780857534378
N/A
Book picture is for illustrative purposes only, actual binding, cover or edition may vary.
The book has been read, but looks new. The book cover has no visible wear, and the dust jacket is included if applicable. No missing or damaged pages, no tears, possible very minimal creasing, no underlining or highlighting of text, and no writing in the margins.