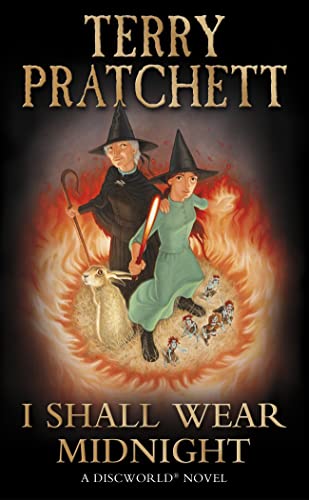 I Shall Wear Midnight
by Terry Pratchett

In Stock
£4.99
Two tunnels in his head . . .Somewhere - some time - there's a tangled ball of evil and spite, of hatred and malice, that has woken up. And it's waking up all the old stories too - stories about evil old witches . . .
Very Good Good Well Read
11 in stock

I Shall Wear Midnight Summary

I Shall Wear Midnight: (Discworld Novel 38) by Terry Pratchett

A man with no eyes. No eyes at all. Two tunnels in his head . . . Somewhere - some time - there's a tangled ball of evil and spite, of hatred and malice, that has woken up. And it's waking up all the old stories too - stories about evil old witches . . . I Shall Wear Midnight is the fourth Discworld title to feature witch Tiffany Aching and her tiny, fightin', boozin' pictsie friends, the Nac Mac Feegle (aka The Wee Free Men).

I Shall Wear Midnight Reviews

"Teen witch Tiffany is one of [Pratchett's]most formidable creations yet" * Time Out *
"Tiffany Aching fans should be ecstatic." * Publishers Weekly starred review *
"Writing at the height of his powers . . . he makes us laugh a lot." -- Nicolette Jones * The Sunday Times *
"funny" * Oxford Mail *
"... everything gets very funny" * Newcastle Upon Tyne Evening Chronicle *

Terry Pratchett (Author) Terry Pratchett was the acclaimed creator of the global bestselling Discworld series, the first of which, The Colour of Magic, was published in 1983. In all, he was the author of over fifty bestselling books. His novels have been widely adapted for stage and screen, and he was the winner of multiple prizes, including the Carnegie Medal, as well as being awarded a knighthood for services to literature. He died in March 2015. terrypratchett.co.ukPaul Kidby (Illustrator) Paul Kidby is thirty-four and lives behind an easel in Dorset. He is best-known for his illustrations of Discworld and its inhabitants in The Pratchett Portfolio, The Discworld Diaries, The Tourist Guide to Lancre and his prints and greeting cards.

GOR002809872
I Shall Wear Midnight: (Discworld Novel 38) by Terry Pratchett
Terry Pratchett
Discworld Novels
Used - Very Good
Paperback
Random House Children's Publishers UK
2011-06-09
432
0552555592
9780552555593
N/A
Book picture is for illustrative purposes only, actual binding, cover or edition may vary.
This is a used book - there is no escaping the fact it has been read by someone else and it will show signs of wear and previous use. Overall we expect it to be in very good condition, but if you are not entirely satisfied please get in touch with us.