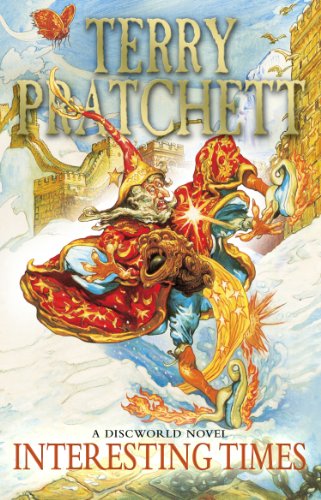 In Stock
£4.49
(AND HIS SONS TERROR AND PANIC, AND DAUGHTER CLANCY)The oldest and most inscrutable empire on the Discworld is in turmoil, brought about by the revolutionary treatise What I did on My Holidays. War (and Clancy) are spreading throughout the ancient cities.
Very Good Good Well Read
41 in stock

MIGHTY BATTLES! REVOLUTION! DEATH! WAR! (AND HIS SONS TERROR AND PANIC, AND DAUGHTER CLANCY) The oldest and most inscrutable empire on the Discworld is in turmoil, brought about by the revolutionary treatise What I did on My Holidays. Workers are uniting, with nothing to lose but their water buffaloes. Warlords are struggling for power. War (and Clancy) are spreading throughout the ancient cities. And all that stands in the way of terrible doom for everyone is: Rincewind the Wizard, who can't even spell the word 'wizard'... Cohen the barbarian hero, five foot tall in his surgical sandals, who has had a lifetime's experience of not dying... ...and a very special butterfly.

"'This spinner of crazy science-fiction tales is a very sophisticated jester'" * The Times *
"'Cracking dialogue, compelling illogic and unchained whimsy... Pratchett has a subject and a style that is very much his own'" -- John Melmouth * The Sunday Times *
"'Pratchett is as funny as Wodehouse and as witty as Waugh'" -- Christina Hardyment * Independent *
"'Imagine a collision between Jonathan Swift at his most scatalogically-minded and J.R.R Tolkein on speed... This total mess of- I suppose- a novel, is the joyous outcome'" -- Gerald Kaufman * Daily Telegraph *

GOR000735464
Interesting Times: (Discworld Novel 17) by Terry Pratchett
Terry Pratchett
Discworld Novels
Used - Very Good
Paperback
Transworld Publishers Ltd
1995-11-01
352
0552142352
9780552142359
N/A
Book picture is for illustrative purposes only, actual binding, cover or edition may vary.
This is a used book - there is no escaping the fact it has been read by someone else and it will show signs of wear and previous use. Overall we expect it to be in very good condition, but if you are not entirely satisfied please get in touch with us.