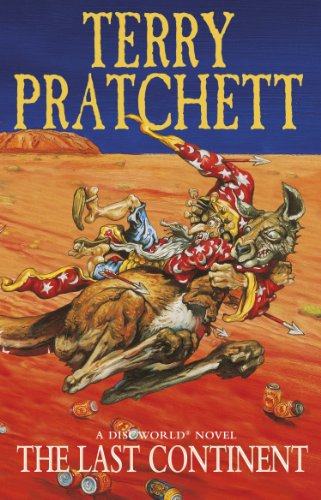 The Last Continent
by Terry Pratchett

New Price
£8.99
Free Shipping in the UK
A man in a hat whose luggage follows him on little legs, who's about to change history by preventing a swagman stealing a jumbuck by a billabong?

'A minor masterpiece. I laughed so much I fell from my armchair' Time Out

The Discworld is very much like our own - if our own were to consist of a flat planet balanced on the back of four elephants which stand on the back of a giant turtle, that is . . .

'Anything you do in the past changes the future. The tiniest little actions have huge consequences. You might tread on an ant now and it might entirely prevent someone from being born in the future.'

The Discworld's most inept wizard has found himself on the Discworld's last continent, a completely separate creation.
It's hot. It's dry . . . very dry. There was this thing once called The Wet, which no one believes in. Practically everything that's not poisonous is venomous. But it's the best bloody place in the world, all right?

And in a few days, it will be except . . . Who is this hero striding across the red desert? Champion sheep shearer, horse rider, road warrior, beer drinker, bush ranger, and someone who'll even eat a Meat Pie Floater when he's sober? A man in a hat whose luggage follows him on little legs, who's about to change history by preventing a swagman stealing a jumbuck by a billabong?

The Discworld novels can be read in any order but The Last Continent is the sixth book in the Wizards series.

'Pratchett's humour takes logic past the point of absurdity and round again, but it is his unexpected insights into the human morality that make the Discworld series stand out' * Times Literary Supplement *
A cross between Tolkien and a gentler, more benign Tom Sharpe. * Sunday Telegraph *
Delightful...gleeful and downright mischevious. The pleasures on the page are so quirkily seductive. Puts one in mind of one of the greatest comic writers of them all PG Wodehouse' * Sunday Telegraph *
A minor masterpiece. I laughed somuch I fell from my armchair' * Time Out *
The humour sparkles as brightly as ever' * The Times *

NGR9780552167604
The Last Continent: (Discworld Novel 22) by Terry Pratchett
Terry Pratchett
Discworld Novels
New
Paperback
Transworld Publishers Ltd
2013-10-10
416
0552167606
9780552167604
N/A
Book picture is for illustrative purposes only, actual binding, cover or edition may vary.
This is a new book - be the first to read this copy. With untouched pages and a perfect binding, your brand new copy is ready to be opened for the first time.