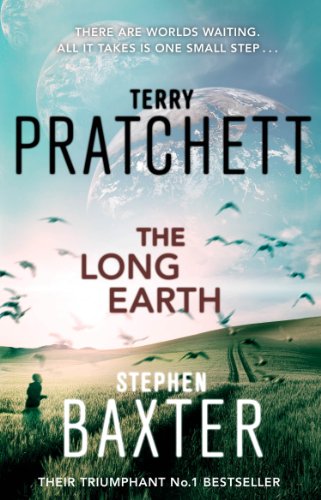 The Long Earth
by Terry Pratchett

In Stock
£5.99
1916: the Western Front. Cop Monica Jansson is exploring the burned-out home of a reclusive (some said mad, others dangerous) scientist when she finds a curious gadget - a box containing some wiring, a three-way switch and a...potato. It is the prototype of an invention that will change the way Mankind views his world for ever.
Very Good Good
18 in stock

1916: the Western Front. Private Percy Blakeney wakes up. He is lying on fresh spring grass. He can hear birdsong, and the wind in the leaves in the trees. Where has the mud, blood and blasted landscape of No Man's Land gone? 2015: Madison, Wisconsin. Cop Monica Jansson is exploring the burned-out home of a reclusive (some said mad, others dangerous) scientist when she finds a curious gadget - a box containing some wiring, a three-way switch and a...potato. It is the prototype of an invention that will change the way Mankind views his world for ever. And that is an understatement if ever there was one...

"By turns thrillingly expansive, joyously inventive and utterly engrossing *****." * SFX magazine *
"An absorbing collaborative effort from two SF giants...a marriage made in fan heaven - Pratchett's warmth and humanity allied to Baxter's extraordinarily fertile science-fictional imagination...there's much to enjoy...a charming, absorbing and somehow spacious piece of imagineering" -- Adam Roberts * GUARDIAN *
"The idea of parallel Earths is one of the most enduring that science fiction has given us, but rarely has it been explored with quite so much gusto as in this new novel by two of the giants of British speculative fiction...a triumph...accessible, fun and thoughtful" -- David Barnett * INDEPENDENT *
"***** Literary alchemy...In the hands of Pratchett and Baxter, the possibilites are almost infinite...a story that revels in big ideas...you can sense the excitement of the authors as they toy with the labyrinthine possibilities of their premise, and it's infectious...thrillingly expansive, joyously inventive and utterly engrossing" * SFX *
"[Pratchett] succeeds in working seamlessly with Baxter...adding a welcome shot of fun to the world of science fiction" -- Alison Flood * SUNDAY TIMES *

Terry Pratchett (Author) Terry Pratchett was the acclaimed creator of the global bestselling Discworld series, the first of which, The Colour of Magic, was published in 1983. His fortieth Discworld novel, Raising Steam, was published in 2013. His books have been widely adapted for stage and screen, and he was the winner of multiple prizes, including the Carnegie Medal, as well as being awarded a knighthood for services to literature. He died in March 2015. www.terrypratchett.co.uk @terryandrobStephen Baxter (Author) Stephen Baxter is one of the UK's most acclaimed writers of science fiction and a multi-award winner. His many books include the classic Xeelee sequence, the Time's Odyssey novels (written with Arthur C. Clarke) and Time Ships, a sequel to H. G. Wells's The Time Machine, a Doctor Who novel, The Wheel of Ice, and most recently the epic, far-future novels Proxima and Ultima. He lives in Northumberland.

GOR004729041
The Long Earth: (Long Earth 1) by Terry Pratchett
Terry Pratchett
Long Earth
Used - Very Good
Paperback
Transworld Publishers Ltd
2013-05-03
432
0552164089
9780552164085
N/A
Book picture is for illustrative purposes only, actual binding, cover or edition may vary.
This is a used book - there is no escaping the fact it has been read by someone else and it will show signs of wear and previous use. Overall we expect it to be in very good condition, but if you are not entirely satisfied please get in touch with us.