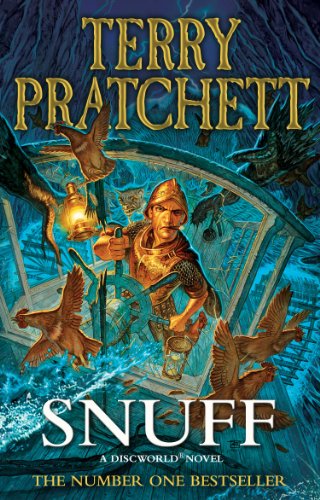 Out of Stock
£5.49
It is a truth universally acknowledged that a policeman taking a holiday would barely have had time to open his suitcase before he finds his first corpse. There are many, many bodies and an ancient crime more terrible than murder.
Very Good
Only 0 left

It is a truth universally acknowledged that a policeman taking a holiday would barely have had time to open his suitcase before he finds his first corpse. And Commander Sam Vimes of the Ankh-Morpork City Watch is on holiday in the pleasant and innocent countryside, but not for him a mere body in the wardrobe. There are many, many bodies and an ancient crime more terrible than murder. He is out of his jurisdiction, out of his depth, out of bacon sandwiches, occasionally snookered and out of his mind, but never out of guile. Where there is a crime there must be a finding, there must be a chase and there must be a punishment. They say that in the end all sins are forgiven. But not quite all...

"[Discworld is] Warm, silly, compulsively readable, fantastically inventive, surprisingly serious exploration in story form of just about any aspect of our world... Where other writers are delighted if they come up with just a handful of comic figures with self-sustaining life in them - Don Quixote and Sancho, the three men in the boat, Pooh and Piglet and Eeyore - Pratchettt breeds them by the score...There's never been anything quite like it" -- Francis Spufford * Evening Standard *
"Pratchett is a master storyteller. He is endlessly inventive... a master of complex jokes, good bad jokes, good dreadful jokes and a kind of insidious wisdom about human nature... I read his books at a gallop and then reread them every time I am ill or exhausted" -- A. S. Byatt * Guardian *
"To keep it fresh into the 39th volume of a series deserves a knighthood... Snuff is entertaining, with all Pratchett's genius on display. He still makes you care about his creations and, amid all the funnies, he can turn on the pathos" * Sunday Express *
"[Pratchett] is now so good at skewering the banalities and injustices of our world through his fantasy creation balanced on the back of a giant turtle that he could probably do it in his sleep... As effortlessly, generously funny as only Pratchett can be, Snuff doesn't stint on laying bare the darker side of life either. A worthy addition to the Discworld canon" * Sunday Times *
"Is there any sign of a falling-off in Sir Terry's extraordinary abilities? No. Not one. This is another brilliant, bravura command performance of comic fantasy. Terry Pratchett with Alzheimer's is still up there with PG Wodehouse. Amazing. Wonderful. Fantastic" -- Harry Ritchie * Daily Mail *

GOR004403433
Snuff: (Discworld Novel 39) by Terry Pratchett
Terry Pratchett
Discworld Novels
Used - Very Good
Paperback
Transworld Publishers Ltd
2012-06-07
512
0552163368
9780552163361
Winner of Bollinger Everyman Wodehouse Prize 2012
Book picture is for illustrative purposes only, actual binding, cover or edition may vary.
This is a used book - there is no escaping the fact it has been read by someone else and it will show signs of wear and previous use. Overall we expect it to be in very good condition, but if you are not entirely satisfied please get in touch with us.