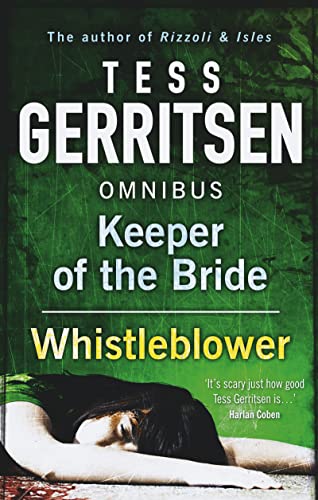 Keeper of the Bride by Tess Gerritsen

KEEPER OF THE BRIDE

Had she survived because of fate, coincidence or just luck?

KEEPER OF THE BRIDE

Had she survived because of fate, coincidence or just luck?

If Nina Cormier's wedding had taken place, she would be dead. But after the bride was left at the altar, the church stood empty when the bomb went off.

It wasn't until a stranger tried to run her car off the road, however, that she realized someone wanted her dead. But who?

That's what Detective Sam Navarro needs to find out. . . fast.

As a cop, he knows better than to become attached to the woman he's trying to protect. But as a man. . .

With a nightmare unfolding around them, Sam and Nina decipher the stunning truth. Now they're at the mercy of a brilliant madman who plays for keeps. . . .

When Victor Holland comes flying out of the night, he runs straight into the path of Catherine Weaver's car.

Having uncovered a terrifying secret which leads all the way to Washington, Victor is running for his life - and from the men who will go to any lengths to silence him.

Victor's story sounds like the ravings of a madman, but the haunted look in his eyes - and the bullet hole in his shoulder - tell a different story.

As each hour brings pursuers ever closer, Cathy has to wonder, is she giving her trust to a man in danger or trusting her life to a dangerous man?

"Tess Gerritsen. . . throws one twist after another until the excitement is almost unbearable. " San Jose Mercury News

"Gerritsen has enough in the locker to seriously worry Michael Connelly, Harlan Coben and even the great Denis Lehane. Brilliant." Crimetime

"Gerritsen is tops in her genre." USA Today

"Tess Gerritsen writes some of the smartest, most compelling thrillers around."Bookreporter

Internationally bestselling author Tess Gerritsen is a graduate of Stanford University and went on to medical school at the University of California, San Francisco, where she was awarded her M.D. Since 1987, her books have been translated into 37 languages, and more than 25 million copies have been sold around the world. She has received the Nero Wolfe Award and the Rita Award, and she was a finalist for the Edgar award. Now retired from medicine, she writes full time. She lives in Maine.

GOR006433667
9781848452794
1848452799
Keeper of the Bride: Keeper of the Bride / Whistleblower by Tess Gerritsen
Tess Gerritsen
Used - Very Good
Paperback
HarperCollins Publishers
2015-01-15
544
N/A
Book picture is for illustrative purposes only, actual binding, cover or edition may vary.
This is a used book - there is no escaping the fact it has been read by someone else and it will show signs of wear and previous use. Overall we expect it to be in very good condition, but if you are not entirely satisfied please get in touch with us
Trustpilot