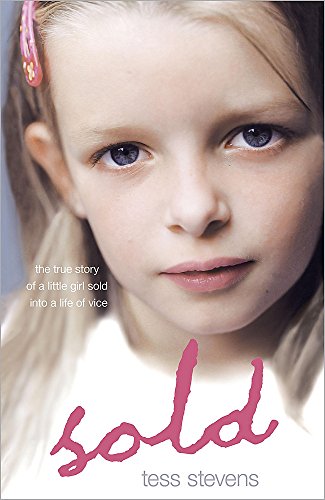 In Stock
£3.99
The heartbreaking story of a little girl who was sold into prostitution by the person she should have been able to trust most - her mother.
Like New Very Good
Only 1 left

Sold: A young girl betrayed by her mother into a life of vice by Tess Stevens

What kind of a woman would sell her own child?

Tess was just eleven years old when her mother sold her to a rich elderly man.

Grace ran a brothel in Croydon and she plunged her young daughter into a terrifying world of sex and depravity. Grace was ruthless in her pursuit of money and had a toxic mix of cunning and high ambition. Dangerous criminals visited the brothel every day, and Tess was exposed to things no little girl should see. A timid child who longed for her mother's love, she grew up in a world of unimaginable horrors with no one to turn to.

Her mother ensured that Tess followed her footsteps and began selling herself. She later opened a brothel too, but became known for looking after her girls and running it as cleanly and as fairly as she could. Along the way she encountered some fascinating characters, including Christine Keeler, the Kray twins and Myra Hindley, as well as numerous well-known actors and politicians.

Amazingly, after such a horrendous start in life, Tess has left prostitution and completely turned her life around.

SOLD offers readers a shocking insight into a criminal underworld and is a compelling account of one woman's recovery from the ultimate betrayal.

Tess Stevens was born and brought up in South London in her mother's brothel. She worked in the sex industry all her life until five years ago when she finally broke away. She now lives with her partner in Sussex.

GOR010545217
Sold: A young girl betrayed by her mother into a life of vice by Tess Stevens
Tess Stevens
Used - Like New
Paperback
Hodder & Stoughton
2008-10-30
352
034096085X
9780340960851
N/A
Book picture is for illustrative purposes only, actual binding, cover or edition may vary.
The book has been read, but looks new. The book cover has no visible wear, and the dust jacket is included if applicable. No missing or damaged pages, no tears, possible very minimal creasing, no underlining or highlighting of text, and no writing in the margins.